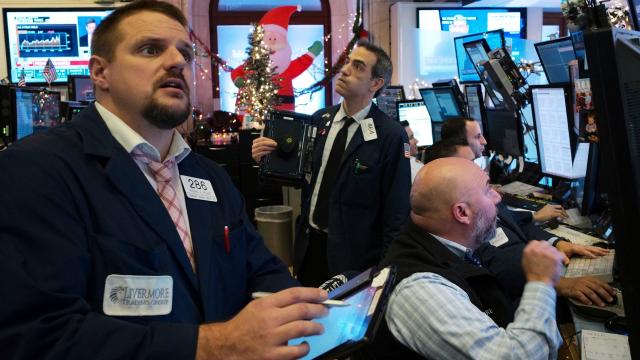 (CNN) — 2018 was a record-setting year for stocks, but it's one investors would rather forget.

December was a particularly dreadful month. The Dow was down 8.7% -- its worst December since 1931. In one seven-day stretch, the Dow fell by 350 points or more six times. This year's Christmas Eve was the worst ever for the index.

2018 wasn't all bad. The S&P 500 set an all-time record on September 20, and the Dow closed at its record on October 3. The Dow also closed more than 1,000 points higher on December 26 -- the first time it ever accomplished that feat.

But 2018 will be remembered for its extreme volatility. The VIX volatility index spiked, and CNN Business' Fear and Greed Index has been stuck in "Extreme Fear" throughout much of the year. The Dow has swung 1,000 points in a single session only eight times in its history, and five of those took place in 2018.

Volatility has been driven by signs of a global economic slowdown, concerns about monetary policy, political dysfunction, inflation fears and worries about increased regulation of the technology sector.

Fear about a global trade war, sparked by the Trump administration's threats and actions against trading partners, remain a source of concern for markets.

Although the US economy has been strong, some fear the Federal Reserve has been raising rates too quickly and could choke off economic growth. Some formerly high-flying US tech stocks, such as Facebook (FB), Apple (AAPL) and Google parent Alphabet (GOOGL) are now down for the year.

The market moved higher after President Donald Trump expressed optimism Saturday that the United States could strike a trade deal with China. He tweeted a deal is "moving along very well," calling negotiations "very comprehensive."

Fear of an economic slowdown, as well as a supply glut, spooked the oil market this year. US crude closed up slightly Monday but ended the year down 24.9% at $45.41 a barrel. It had closed as high as $77.41 a barrel in late June, falling 41.3% from that peak.

Brexit's impact on the United Kingdom and Europe also worried investors, as did a slowdown in the Chinese economy.

The FTSE All-World index, which tracks thousands of stocks across a range of markets, plummeted 12% this year. It's the index's worst performance since the global financial crisis, and a sharp reversal from a gain of nearly 25% in 2017.

The market damage this year was most pronounced in China, where the world's second largest economy is feeling the effects of a darkening trade outlook and government attempts to rein in risky lending after a rapid rise in debt levels.

The Shanghai Composite entered a bear market in June and has now declined nearly 25% since the start of the year. The Shenzhen Composite, which includes many of the country's tech firms, dropped by more than 33% over the same period. In Hong Kong, the Hang Seng is down 14%.