Dow rallies on hopes for a stimulus package 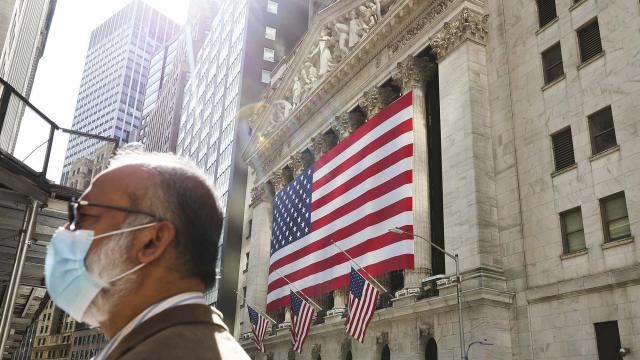 CNN — The US stock market rallied on Monday, ignoring negative headlines that weighed on the market over the past few weeks in favor of hoping for a stimulus deal out of Washington.

Stocks closed sharply higher after a whole session spent in the green. The Dow closed 1.5%, or 410 points, higher. The index had been up more than 500 points at its high point. The broader S&P 500 climbed 1.6%. These gains come after four consecutive weeks of losses.

As appetite for riskier investments boosted stocks, safety assets like the US dollar sold off.

Investors are hoping that Congress will agree on a new stimulus deal, despite fruitless negotiations in recent months.

On Sunday, House Speaker Nancy Pelosi told CNN that House Democrats may offer their latest stimulus proposal as legislation if revived talks with the Trump administration do not yield a deal her party can get behind.

Yet even as investors are feeling good about a possible deal, economists are a bit more pessimistic. Morgan Stanley became the latest bank to downgrade its growth outlook because of the slimming chance of another stimulus bill this year.

The approaching end of the month might be another reason stocks are higher. After a bad month in the market, investors almost always have a need to buy some stocks at the end of it unless they decide they want to be less invested than before, said Sebastien Galy, senior macro strategist at Nordea. After Monday, there are only two trading days left in September.

But this doesn't mean the worries that pushed stocks lower in the past weeks are gone.

In fact, not that much has changed from last week, and volatility remains high. The CBOE Volatility Index, or VIX, was moderately lower after the market closed on Monday but remains in elevated territory even though it has come down from the panic-fueled levels it has hit earlier this year.

The impending election, uncertainty about the future path of Covid-19, worries about rising infections in the winter and a slowdown of the economic recovery have been weighing on the market for weeks.

The week ahead will also be particularly busy with economic data and political events.

President Donald Trump and Democratic presidential candidate Joe Biden are facing off in the first of three debates on Tuesday, and the September jobs report -- the last look at the employment situation before the election -- comes out on Friday. Economists predict 850,000 jobs were added to the US economy in September, a sharp slowdown from the 1.4 million added in August. The unemployment rate is expected at 8.2%, marginally lower than in the prior month.