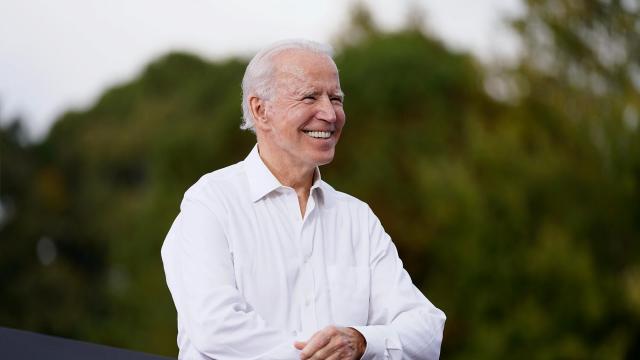 CNN — The Dow and S&P 500 were up on Monday, one day before Election Day, when Wall Street expects Joe Biden will win the presidency and Democrats will retake the Senate and maintain control of the House.

Stocks opened sharply higher before encountering some volatility and paring some gains.

Both benchmarks are retracing some of their losses from last week, when they recorded their worst week since March.

Meanwhile, the Nasdaq Composite reversed its earlier gains and fell 0.1% in the early afternoon.

Although stocks typically favor Republican policies, investors are eager for more fiscal stimulus, that will buoy an economy headed south once again as coronavirus cases soar. Investors predict a "blue wave" would lift the chances of a comprehensive stimulus deal getting passed in the winter.

A Biden win would also likely mean less news and headline risk for stocks in the term to come, investors believe.

"If the polls are roughly right, Joe Biden is going to win the election comfortably and we will know that before midnight tomorrow," said Andy Laperriere and Don Schneider at Cornerstone Macro.

Even if the polls are wrong, the evidence is still pointing to a Biden victory, they added. Prediction market PredictIt puts a Biden win at 65%.

"We have been emphasizing that the Senate outcome is important for the trajectory of fiscal policy," said Citi economist Andrew Hollenhorst in a note to clients, even though neither party is likely to get a filibuster-proof majority so bipartisan cooperation could still be needed for the next stimulus bill.

"Under any election scenario we expect a $1.5 trillion plus fiscal package, possibly as early as just post-election," Hollenhorst said.

Congress has been stuck on negotiating a second stimulus deal since the summer. Investors have been waiting for results, getting jumpy at any headlines about the progress. What this really tells us is that markets believe the US economy needs more help getting back on track as the effects of the CARES Act are running out.

So far the economy's improvements have been rather uneven. For example, millions of jobs have been added back since the spring lockdown, but the economy is still down more than 10 million jobs from February.

Analysts at Goldman Sachs expect consumer spending to wane in the coming months because of the Covid-19 resurgence is keeping people at home and any new stimulus package will probably take until 2021 to kick in.

And as if this election and its repercussions weren't enough for investors to think about, the week is also filled with important economic reports, including the October jobs report.

On Monday, the Institute for Supply Management reported that America's factories did better than economists had predicted in October. The sector's purchasing managers' index rose to 59.3 points from 55.4 points in September, its highest level since September 2018. Any value over 50 denotes an growth in the sector.