The US dollar plows ahead as global stock markets remain volatile 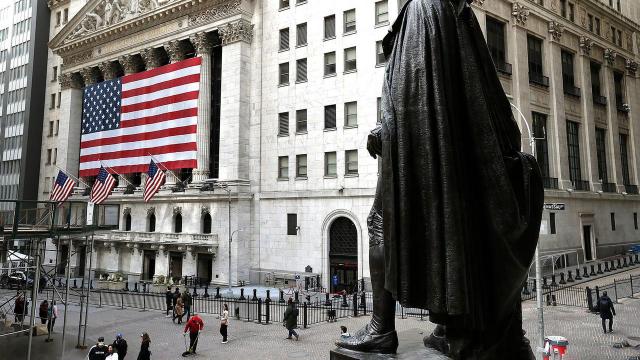 By Jill Disis and Laura He, CNN Business

CNN — Dramatic action from policymakers failed to bring much calm to financial markets on Thursday, with stocks in Asia sinking while European indexes and US futures posted only tepid gains. The only clear winner was the US dollar, which has surged as investors scramble for cash.

US stock futures rose slightly after the European Central Bank announced it would pump $821 billion into keeping the financial system afloat. The ECB measure is just the latest emergency stimulus plan announced by central banks to help economies in the face of a potentially disastrous worldwide recession.

Those gains followed a rough trading session for stocks in Asia Pacific. The Korea Exchange briefly suspended trading in Seoul after markets there plummeted, tripping a circuit breaker. The benchmark Kospi dropped 8.4%.

Japan's Nikkei 225 fell 1%. The Bank of Japan earlier offered to buy 1 trillion yen ($9 billion) worth of Japanese government bonds in an unscheduled move.

But global restrictions on movement and the continued spread of the coronavirus are outweighing the responses from policymakers, according to analysts at UBS Global Wealth Management CIO.

"In the absence of credible signs that infection numbers in the western world can be controlled, volatility is likely to remain elevated," they wrote in a research note.

The US dollar, meanwhile, jumped to a record high against the Mexican peso. The greenback also rose against the Japanese yen — a traditional safe haven currency — to its highest level since February.

"The strong US dollar is slamming global capital markets like a sledgehammer today," wrote Stephen Innes, global chief markets strategist at AxiCorp. He added in a research note that the "unbridled" demand for the world's reserve currency is causing extreme weakness in the Australian and New Zealand dollars, as well as the Korean won.

Central banks in emerging markets are also in a "world of pain," Innes said, as they can't justify selling reserves of the dollar when their local banks are seeing a rise in demand for the currency.

"That merely signals more [US dollar] strength to come as the buying frenzy continues," he added.

The British pound has also been routed. The currency has fallen to roughly $1.15, trading at its lowest levels against the dollar since the 1980s. The United Kingdom has been rattled by the virus, and is now considering a partial lockdown in London to stem its spread, multiple sources have told CNN.

The flurry of steps taken worldwide by central banks to stave off catastrophic economic turmoil, including the European Central Bank's massive economic rescue plan, has not eased investor panic.

Other central banks also detailed new plans during daytime hours in Asia, with little effect on stock markets. The US Federal Reserve, for example, said it would enhance liquidity for critical money markets.

And the Reserve Bank of Australia announced it would cut rates to 0.25%, also in a bid to manage the coronavirus fallout. Other central banks will likely be forced to follow suit.