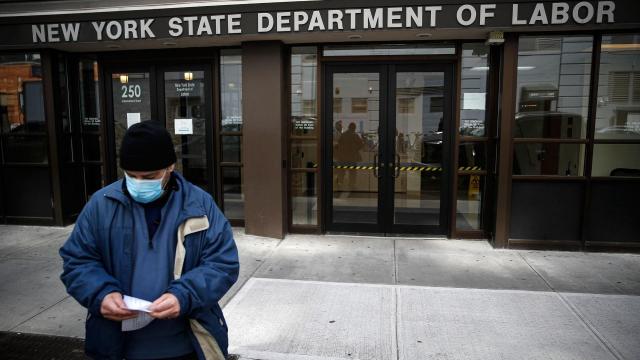 In a historic expansion of unemployment insurance, the federal government would give jobless workers an extra $600 a week on top of their state benefits for four months as part of the $2 trillion stimulus bill the Senate passed unanimously late Wednesday night.

"It has unemployment insurance on steroids," Senate Minority Leader Chuck Schumer said Tuesday of the package. "But, and most importantly, the federal government will pay your salary, your full salary for now four months."

While the extra money in the legislation wouldn't fully replace the lost wages of some higher-paid workers, it would significantly add to everyone's regular state benefits, which range from $200 to $550 a week, on average, depending on the state.

A spike in unemployment

The massive boost in unemployment insurance, which is projected to cost about $250 billion, comes as the coronavirus pandemic wreaks havoc on the US economy. A record 3.3 million people filed for first-time jobless benefits last week as governors around the country shut down most non-essential businesses in their states, the Department of Labor reported Thursday.

"The generosity of this benefit is unprecedented," said Michele Evermore, senior policy analyst at the National Employment Law Project. "Because this situation is so different, we have to break all the rules."

In addition to the enhanced checks, lawmakers want to add up to 13 weeks of extended benefits, which would be fully covered by the federal government. Currently, state unemployment checks last up to between 12 weeks and 28 weeks, depending on the state. Most states provide up to half a year of benefits.

Plus, the deal calls for a new pandemic unemployment assistance program, which would provide jobless benefits to those who are unemployed, partially unemployed or unable to work because of the virus and don't qualify for traditional benefits. This includes independent contractors and the self-employed, who typically aren't eligible to file for unemployment, and so-called gig workers, who aren't eligible in many states. These benefits would mirror what's available in an individual's state.

The legislation would also assist those who have had their hours reduced by providing incentives to states to adopt work-sharing programs, which allow employers to cut workers' hours but not lay them off. Those workers are then eligible for some unemployment benefits. Some 27 states, plus the District of Columbia, already have work-sharing laws in place.

Furloughed workers typically qualify for unemployment assistance so they would receive all the enhanced benefits under the stimulus package.

But part-time employees are only eligible for unemployment in certain states. It's unclear what aid the Senate deal would provide part-time workers, Evermore said.

The bill also calls for allowing the jobless to receive benefits immediately, instead of waiting a week.

The package hit a last-minute snag Wednesday when several Republican senators raised objections to the jobless benefits provision, saying it would provide larger checks to unemployed workers than they would receive in wages.

"This bill pays you more not to work than if you were working," said South Carolina Republican Sen. Lindsey Graham. "You're literally incentivizing taking people out of the workforce at a time when we need critical infrastructure supplied with workers. If this is not a drafting error, then it's the worst idea I've seen in a long time."

The Republican critics secured a Wednesday evening vote on an amendment to cap benefits at 100% of the laid-off workers' former wages, but it did not pass.

The legislation now heads to the House, which is expected to vote on it Friday.

The Senate's stimulus package follows one passed last week that provided states with $1 billion in administrative funding to run their programs, many of which have been overwhelmed by the crush of people filing for first-time benefits. The prior package also covers states' share of the extended jobless benefits program.

The surge in coronavirus-related layoffs has also prompted many states to expand who qualifies for benefits, extending assistance to those who lose their wages because they are sick or quarantined, caring for an ill family member or home because their children's schools have closed.

The unemployment provisions in the Senate package would expire at the end of the year.

This story has been updated with the Senate passage of the bill and additional details from the legislation.