Still recovering, Raleigh officer back at work 1 year after shooting

Raleigh, N.C. — Thursday is National Law Enforcement Day, and the Raleigh Police Department celebrated in the best way -- by welcoming back one of their own.

There was a thunderous applause from dozens of officers, staffers, officers of the court, friends and loved ones as Officer Charles Ainsworth was escorted to police headquarters on Thursday morning.

The squad Ainsworth was working with on Jan. 9, 2018, the night he was shot, was the first to greet him personally with a welcome back sign. 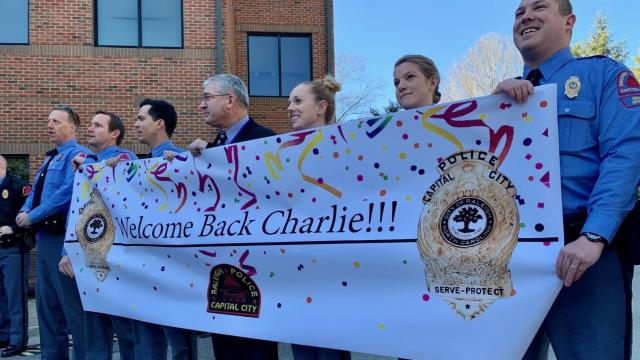 During Ainsworth's recovery, the Raleigh Police Department threw its full support behind the officer and his family.

One year ago, Ainsworth sustained multiple gunshot wounds and was critically injured while attempting to apprehend a stolen car suspect on Western Boulevard. He spent the past year recuperating from numerous surgeries and training and strengthening his body and mind in anticipation of his return to service, police said.

Officer Ainsworth’s dedication, determination, and resilience in the face of such overwhelming circumstances are an example to everyone,” said Raleigh Police Chief Cassandra Deck-Brown. “We are so thankful for the great strides and remarkable progress he has made in the past year. We are pleased and proud to welcome him back to service with the Raleigh Police Department."

Ainsworth was following up on a report that a car stolen at gunpoint had been spotted in southwest Raleigh when he was shot several times, including in the neck. He was hospitalized at WakeMed since the shooting and had suffered a series of strokes, according to his family.

He was finally released from the hospital in April.

Cedric Jamal Kearney, of Henderson, is charged with attempted murder, two counts of assault on a law enforcement officer with a firearm and possession of a stolen firearm in the shooting.

In March, Ainsworth's wife told WRAL News that doctors called Ainsworth’s recovery remarkable, and that their family has received an outpouring of support from the law enforcement and the Triangle communities.

The department recently posted on social media a video Ainsworth running with his fellow officers. They also posed for a picture, touting his continued recovery and his eventual return to duty.

Ainsworth, who still has a few physical challenges, did not address the media on Thursday but was happy to be back. He will return to work in an administrative role until he is fully recovered.