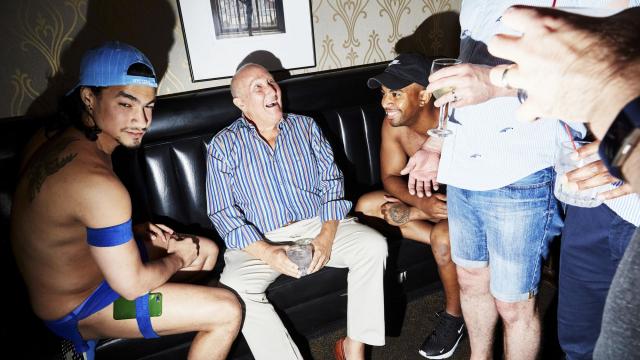 NEW YORK — Who says nightlife is only for the young?

Certainly not Paul Galluccio, 82, the co-owner of Townhouse Bar, a well-appointed gay piano bar on East 58th Street that draws dapper gentlemen and their younger male admirers, some of whom are reputed to be on the hunt for sugar daddies.

“I don’t want to retire,” Galluccio said on a recent Saturday night, when he arrived around 8 p.m., dressed in a striped Façonnable shirt, as he slowly climbed six steps of the front stoop. (He has arthritis.) “I love working. It’s a hobby, and I have so much fun every day.”

Galluccio, who was visiting from his primary home in Fort Lauderdale, Florida, sat in a brown leather lounge chair in the main room, which is bedecked with red-on-gold damask wallpaper, Tiffany-style hanging lights and framed architectural drawings.

A pianist in the corner played “Over the Rainbow,” as a slightly balding man in his mid-30s, wearing a short-sleeved shirt, got up off his stool to sing along off-key.

The Townhouse, which turns 30 next year, is also the rare gay bar that enforces a conservative dress code. Its website advises against baseball caps, gym wear, ripped clothing, oversize jeans and do-rags. (People of color have not always felt welcome there.)

Galluccio scanned the crowd, which included a septuagenarian in a Polo shirt and pink pants chatting with a guy half his age, who wore sunglasses. There was also a group of men in their mid-30s, all wearing T-shirts and drinking martinis.

“Look at those shoulders,” Galluccio said, noticing a 20-something guy with sandy blond hair and cargo shorts, sitting with an older man on the banquette.

If the crowd seemed slightly younger than it used to be, that’s no accident. Galluccio has been courting those without AARP memberships. On weekend nights, the smaller lounge downstairs now features shirtless go-go boys of all races, writhing to European disco.

“The older people don’t go out as much,” he said. “They move away or they’re dead. You need to bring in younger people.”

“Our regular customers are in Palm Springs,” he added. “Or six feet under.”

Galluccio did not set out to become a nightclub owner. Born and raised in Hawthorne, New Jersey, he dropped out of Hawthorne High School at 16 to pursue playing the clarinet, sax, flute and piano. That same year, he got sidelined into retail, and in 1960 he opened Paul Scott Ltd., a boutique in New Rochelle, New York, which forced him to turn down a job with the Benny Goodman Orchestra.

He was married to a woman at the time, but he divorced her in 1972, after 12 years of marriage. (He considers his daughter, Pamela Galluccio Riccio, 51, a real estate agent who lives in Eastchester, New York, his best friend.)

After the split, he went out clubbing a lot in Manhattan, at places like Adam’s Apple, a disco and restaurant on East 61st Street. “Guys and girls were picking me up,” he said. “Sometimes I liked the guy, sometimes the girl. But I preferred men. They don’t want to own you. Women right away say, ‘I want to get married.'”

In 1988, while he was at a gay piano bar in the East 50s (he thinks it was called Regent East), he met and fell in love with a distinguished young man in the hotel business, with whom he had a 17-year relationship. (Galluccio would not name him, because he is not openly gay.)

The two would go clubbing together. One night, Galluccio tried to go back to that bar himself and was ignored by the doorman. Infuriated, he decided to open a piano bar of his own. In 1989, he spotted an apartment building on East 58th Street that was for rent, and he and a business partner, Bob DeBenedictis, signed a lease and opened the Townhouse.

“There were young guys who were attracted to older men and now knew where to find them,” Galluccio said. “Some were hustlers. We’d try to curtail that. We found out what was going on and said, ‘You’re not welcome here.'”

“I wanted a place to bring my parents to,” he said. In fact, six months after it opened, he did so, and his father liked the place so much he joked about wanting to become a regular. Galluccio replied: “Dad, you’re not allowed unless I accompany you.”

Galluccio now runs other nightclubs, as well as restaurants and hotels. In 1996, he opened Lips, a drag bar on East 56th Street that has offshoots in San Diego, Atlanta and Fort Lauderdale. “Ninety percent of our audience is straight: bachelorette parties, anniversaries, divorce parties,” he said. “I love seeing people laugh.”

He is also a partner in the Westside Club, a gay bathhouse in Chelsea, which opened in 1995. It remains open, despite the popularity of hookup apps like Grindr. “But people like to see what they’re getting in person,” Galluccio said. “We see things are starting to pick up again.”

Despite his arthritis and advancing age, Galluccio isn’t out of commission himself. Not long ago, while he was shopping at a 7-Eleven in Fort Lauderdale, he noticed that a 32-year-old guy was cruising him.

“We started going to dinner and movies,” he said with a twinkle.