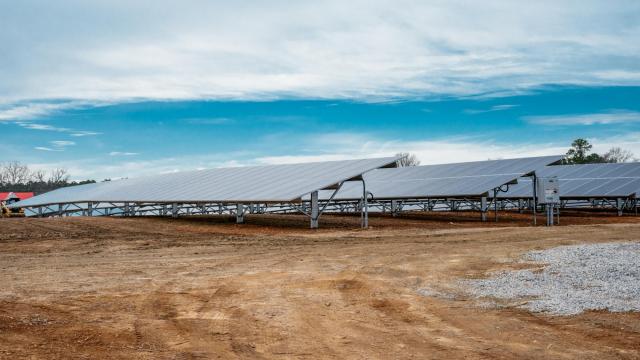 Homegrown energy, boundless local economic advancement opportunities, and jobs for communities that need them most. What’s not to like about solar energy?

It seems our current federal administration is determined to find something. President Donald Trump’s recent move to impose a 30 percent tariff on solar panels looks a lot like a solution looking for a problem.

Here in North Carolina, a state ranked #2 in the nation for installed solar capacity, this news is confusing and frustrating at once.

Even those who do not identify as a solar consumer or advocate have experienced the residual benefits of our state’s growing, $10 billion clean energy economy, largely propelled by solar in the past decade. Those benefits include new property tax revenues, jobs, local economic expansion, and lower long-term electric rates.

Yet, we can’t seem to shake the target off our back. This new tariff is primed for a direct hit on North Carolina-based solar businesses like ours, with a bullseye on our many customers and employees.

In a state and nation still predominantly powered by aging, traditional energy resources that are much costlier – and unquestionably less healthy – for our citizens, why would our highest-ranking lawmaker seek to cripple a proven way forward? There is simply no logical answer; it can only be misguided, extreme ideological opposition.

After all, clean energy is no longer a niche industry embraced by groups on the liberal end of the political spectrum. North Carolina is living, working proof of its bipartisan appeal. In fact, the growing success of North Carolina’s clean energy economy in the past decade can be directly attributed to Republicans and Democrats working together to pass smart policies that enabled its growth, while delivering more choices for customers via market competition.

In considering the severe impacts a 30 percent solar tariff might have on our local economies, we have to wonder: Did President Trump consider any of the very public and thoughtful anti-tariff stances expressed by many of his conservative colleagues in D.C. – including both of North Carolina’s U.S. Senators Thom Tillis and Richard Burr; conservative-backed American Legislative Exchange Council (ALEC) and its current president, N.C. Rep. Jason Saine (R-Lincoln), and The Heritage Foundation; and countless other business groups with interests otherwise complementary to President Trump’s “America First” agenda? Evidently, even the loudest voices on President Trump’s party line can fall on deaf ears.

In its coverage of the tariff decision, The Wall Street Journal asks, “Can Donald Trump stand prosperity?” We have to ask that question ourselves, as this decision immediately jeopardizes current and future economic opportunities resulting from solar energy.

According to the NC Sustainable Energy Association, solar supports over 5,000 full-time jobs in North Carolina. The Solar Energy Industry Association estimates 23,000 Americans will lose their jobs as a result of this new tariff. That’s a tough pill to swallow in any instance; making the pill that much more bitter is the fact this unnecessary tariff will primarily benefit two companies which operate outside of the U.S. Isn’t it ironic?

Beyond the head-scratching and lingering questions that remain about this puzzling and disappointing policy move, one thing remains certain: Our solar industry is resilient.

Here in North Carolina, our strong bipartisan approach to energy policy-making will keep working relentlessly against regressive policies like this tariff to continue moving our clean energy future forward. We’d like to thank the many current decision-makers: Gov. Roy Cooper; U.S. Sens. Burr and Tillis; and state Reps. Saine and John Szoka, to name a few, for their leadership and support for clean energy.

This tariff is not the first time we’ve been hit, and it likely won’t be the last – but job-creating, cost-saving, renewable and clean solar energy isn’t going anywhere.

Yes Solar Solutions is a nationally accredited solar design and installation company serving businesses and homeowners throughout the Carolinas. Stew Miller serves on the Board at Conservatives for Clean Energy. Strata Solar is a national leader in utility-scale solar that actively develops in over 20 states and operates over 160 solar farms in North Carolina. Brian O'Hara serves as chairman of the North Carolina Clean Energy Business Alliance.