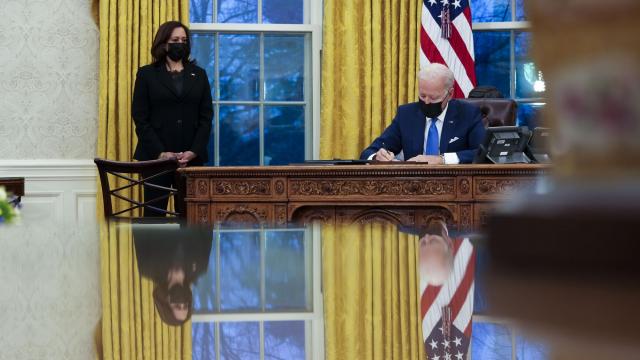 EDITOR'S NOTE: Steve S. Rao is a council member at-large and former mayor po tem of Morrisville and serves as a board member for the New American Economy, a bipartisan coalition of mayors and business leaders, committed to comprehensive immigration reform and the economic impact of immigrants on the economy.

Watching President Joe Biden’s inauguration last month, I was incredibly moved, both by the peaceful transfer of power and the sight of an Indian-American daughter of immigrants being sworn in as our nation’s vice president.

My own parents came to the United States from India in the 1960s, and my father brought our family to West Virginia so he could work there as a surgeon. I was raised to be proud both of my Indian heritage and my status as an American citizen; like Vice President Harris, I was encouraged to express that pride through public service.  In 2011, I became the first Asian-American elected to public office in North Carolina, serving my hometown of Morrisville as council-member and later as Mayor Pro Tem.

As a public servant, I know that ceremony and symbolism are just a start. What really matters is the hard work of re-unifying our country. And I have a proposal for doing so: Building a rational, human immigration system.

I know this sounds counter-intuitive: immigration has long been divisive. But especially after the Capitol siege, we desperately need to remember the spirit of tolerance, generosity and optimism that defines us as a nation. There no better way to do this than welcoming outsiders to our shores.  And fortunately we want to. In fact, more Americans than ever before now say immigration should be increased rather than decreased and 57% — including four out of 10 Republicans — now support a path to citizenship for undocumented immigrants.

So far, the new administration has taken bold steps to make this happen. Hours after President Biden was sworn in, he sent the U.S. Citizenship Act of 2021 to Congress — a sweeping and ambitious piece of legislation that creates an eight-year path to citizenship for law-abiding undocumented immigrants, modernizes the immigration system for skilled workers and green card holders and supports asylum seekers.  Biden also moved quickly to pass executive orders ending the racist “Muslim ban,” shoring up DACA, and halting cruel immigration enforcement policies. He has pledged to rebuild refugee programs and reunite families separated at the U.S. border.

But the Biden immigration plan isn’t just about restoring American empathy — it will also bring enormous practical benefits to communities all across the country, including right here in North Carolina. Our state has 62,178 business owners — including almost 11,000 in the Raleigh metro area — who collectively generate $1.6 billion in business income, according to New American Economy.

Of those though, almost 25,000 are undocumented and currently at risk of deportation. With statewide unemployment expected to remain above 5% through 2021, we urgently need these innovators and job creators. A pathway to lawful status would ensure we don’t lose their vital contributions.

Biden’s plan would also increase tax revenues for hard-hit state and local governments. While undocumented immigrants already pay almost $32 billion in taxes, it’s estimated their total tax contributions would go up by more than 18% if they were given lawful status, because workers with proper work authorization wouldn’t have to accept under-the-table payment.

Finally, Biden’s plan looks optimistically toward the future. Our economy will rebound, and that means we’ll again face severe worker shortages. Even now, immigrants are doing the jobs that Americans aren’t eager to do, and to provide the skills that Americans don’t have.  A third of our state’s crop production workers were born overseas; so too were a third of our construction workers, and more than a third of our software developers. Nearly a fifth of all our state’s employees in fields relating to science, technology, engineering, or math are immigrants. These people are key to supporting our American-born workforce.

The bottom line is that implementing Biden’s immigration plan isn’t just good for our national spirit — it’s also the smart thing to do for North Carolina’s economy. Still, there’s only so much that President Biden can do on his own. The president can use his executive authority to protect the Dreamers and take a kinder approach to refugees and asylum seekers, but it will take legislative action to create a path forward for undocumented North Carolinians and give our businesses flexibility to hire the people they need to fuel growth.

That’s where we need lawmakers from both parties to step up. On immigration, President Biden has given our country new leadership. Now it’s time for our state’s representatives in Washington to do their part and pass the legislation that’s needed to support North Carolina’s businesses, give immigrants a fair shake, and get our economy growing again.