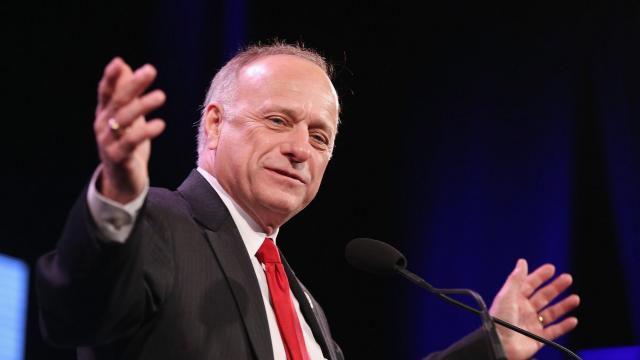 (CNN) — The House of Representatives, by a vote of 424 to 1, approved Tuesday a resolution rejecting white supremacy and white nationalism after Rep. Steve King of Iowa made racist comments in a story published last week by The New York Times.

Democratic Rep. Bobby Rush of Illinois was the one member who voted against the resolution, saying it does not go far enough. Rush has introduced his own censure resolution, which represents a stronger rebuke specifically focused on the Iowa Republican.

King was among those who voted for the resolution of disapproval that was inspired by his comments, saying on the House floor he agrees "with the language in it," referring to the part condemning white supremacy and white nationalism. King continues to maintain his comments were taken out of context.

"I can tell you this: That ideology never shows up in my head, I don't know how it could possibly come out of my mouth," King said in a speech on the House floor.

House Republican Leader Kevin McCarthy announced King wouldn't be seated on any committees this Congress because of his comments. And while there is growing pressure for the congressman to resign, Republicans are far from united around calls for him to step down.

During a GOP leadership news conference on Tuesday, House Republican Conference Chairwoman Liz Cheney of Wyoming said she agreed with Senate Majority Leader Mitch McConnell that King's comments had no place in the GOP and that he should find a different line of work.

Rush specifically commented on Cheney's comments, saying her comments were harsher on King than the Democrats' actions.

House Democratic Whip James Clyburn defended his reasoning for putting forward the resolution of disapproval that was voted on Tuesday. He acknowledged there were concerns that a censure of King could ignite a battle of censures over offensive speech between the two parties.

If a censure resolution does get a vote, however, Clyburn said he would support it, adding he would even go a step further than that if it were possible.

"I think expulsion would be fine for me," he said, noting that Cheney and GOP Sen. Mitt Romney both said it was time for King to resign.

Meanwhile, other Republicans, like McCarthy, say it's a matter up to the voters in King's district whether he should stay in Congress.

King tweeted Monday night that he believes the decision to remove him from committees was a political one. King refused to answer questions from reporters Tuesday about whether he'd consider resigning. On Friday, King said he regretted the "heartburn" his comments had caused his district, but he has not apologized and said his comments published last week by The New York Times have been "mischaracterized," comments he repeated Tuesday in the speech on the House floor.

There's no overestimating how significant it is to pull a member from committees, especially one like King, who was the highest-ranking Republican member on the Judiciary subcommittee that handles constitutional matters.

But King has found few friends or backers at this point. Aside from Rep. Louie Gohmert, a Texas Republican known for his own controversial comments, members are not racing to King's defense. Gohmert was the only member to speak out in opposition to McCarthy's decision at Tuesday's GOP conference meeting, according to one source in the room.

Otherwise, Republicans have largely been backing McCarthy on the decision, including members of the conservative House Freedom Caucus of which King is a member.

"For Republicans all across the country, not just here in the House, I think it's important to reinforce the message in every way possible that our party does not support racism. It's always been wrong," House Freedom Caucus member Rep. Warren Davidson of Ohio told CNN.

Besides the vote of disapproval, two Democrats, including Rush, have introduced separate resolutions to censure King. In the history of the Congress, only 23 members have been censured. The last one censured was Democratic Rep. Charlie Rangel, who was censured for ethics violations including misusing official government letterhead for fundraising, impermissible use of a rent controlled facility for campaigning and filing inaccurate financial disclosures.

Some Republican members said Tuesday they think there will be support among the GOP for a censure and one Republican is teaming up with Democratic Rep. Tim Ryan of Ohio to sponsor King's censure.

House Majority Leader Steny Hoyer was noncommittal Tuesday morning in a meeting with reporters on whether Democratic leadership would support a censure effort. Hoyer was asked if he thinks a censure could open up a Pandora's Box where members on both sides of the aisle would be calling for censures over offensive speech.

"The answer is yes," he said, declining to expand on the thought.

"Republicans have taken very strong action, which I applaud them for and I think they did the right thing," he said. "I think they're very concerned about their party being perceived as a Steve King party, frankly."