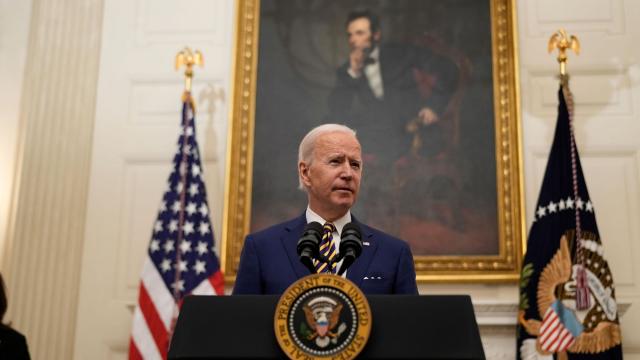 CNN — If you thought Fox News would dial down the highly charged rhetoric after Donald Trump left office, you'd be mistaken. It is not slowing down when it comes to bashing President Joe Biden.

The network, which has long attacked Democrats, has noticeably ramped up the war of words about Biden since Inauguration Day.

"These channels are more anti-Democrat than they are pro-Trump," said CNN's Chief Media Correspondent Brian Stelter on "Reliable Sources" Sunday. "The Biden bashing has been turned up to 11 ... and 12 and 13."

In addition to calling Biden weak, frail, senile and a radical, conservative media outlets, including Fox News, OAN and Newsmax, cynically argue that the mainstream media has been fawning over Biden, failing to cover him critically.

"Every hour, every day, that's the narrative," Stelter said. "And it's going to be like this for the next four years."

Conservative media had been pushing lies about the election for months, amplifying false information about election fraud, telling viewers the election was rigged and how Biden didn't rightfully win the presidency. Biden, in his inaugural address, plead with those outlets to take down the temperature and tell their viewers the truth: "We must reject the culture where facts themselves are manipulated — and even manufactured," he said.

"Biden can talk about politics not needing to be a raging fire," said Stelter. "But it is. It was yesterday, it is today and will be tomorrow on these shows that millions of people watch."

That's not about to change, said Stuart Stevens, former top strategist for Mitt Romney and current senior advisor to the Lincoln Project on "Reliable Sources."

That's why Australia's Rupert Murdoch -- who has ownership stakes in News Corp and Fox Corp., the parent companies for outlets including Fox News and the New York Post -- is "the most dangerous immigrant in America," Stevens said

He said that Murdoch is "a classic example of somebody who never assimilated American values."

Stevens said Fox and similar outlets have created a new identity for the Republican party: victimhood. He called it a "pathetic way to look at your role in the world and America's role in the world."

"When Ronald Reagan was president, to be born in America was to win life's lottery," he said. "Now, if you're a Republican, if you're a Trump voter, to be born an American is: you're a victim, you're a sucker."

Correction: An earlier version of this story incorrectly identified Fox News' parent company. It is owned by Fox Corp.