Raleigh, N.C. — A flatbed truck pulled up outside the state Court of Appeals building in downtown Raleigh Monday to haul away a statue of former North Carolina Chief Justice Thomas Ruffin, who was a slave owner. It's not clear where the statue will be taken.

Ruffin was the third chief justice of the state Supreme Court. He overturned a ruling in the 1829 case of State v. Mann involving a Chowan County man who was found guilty of assault for shooting a female slave in the back as she fled.

"We are working with everyone involved to ensure a safe removal (of the statue), as judges and staff of the Court of Appeals continue to report to work in the building where the statue is located," Sharon Gladwell, communications director for the state's court system, told WRAL News in an email statement.

A forklift was seen at the building that will apparently be part of the equipment used to remove the statue. 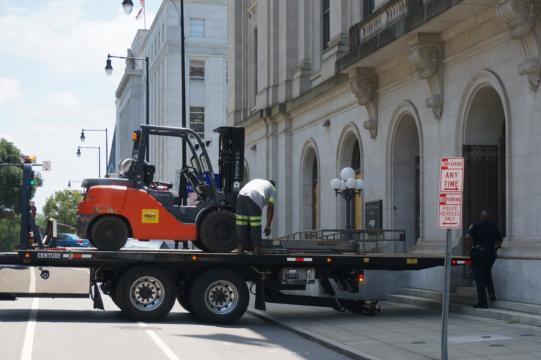