State will again reverse water advisories for some well users 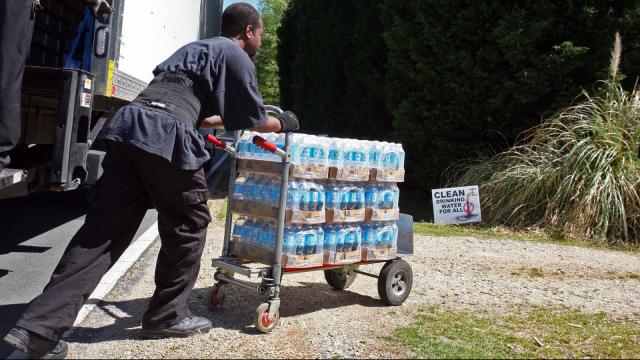 Raleigh, N.C. — When North Carolina's health director testified in mid-May in an ongoing lawsuit over Duke Energy's coal ash basins, he told environmental lawyers that a handful of well owners near the pits would – that very day – get phone calls from officials declaring their water unsafe to drink.

Testing last year showed that, for some residents, particularly those near the Buck Steam Station in Salisbury, levels of the cancer-causing hexavalent chromium in well water was higher than 10 parts per billion.

Above that level, Dr. Randall Williams said he would not recommend drinking the water.

"Our standard is 10, so we are – anything over 10, whether it is total chromium or hexavalent chromium, we are going to say, 'Do not drink your water,'" Williams said, according to a transcript of his sworn testimony released Tuesday by the Southern Environmental Law Center, a party to the coal ash suit.

He gave that testimony May 18.

Almost two weeks later, none of the well owners with hexavalent chromium or total chromium levels higher than 10 parts per billion reached by WRAL News Tuesday morning had received any new information from the Department of Health and Human Services.

Such advice would have been the third communication for hundreds of well owners across the state since 2015, when the state first issued do-not-drink recommendations to those residents. In March, state health and environmental officials changed course, lifting the do-not-drink orders.

At least some of them are still waiting for the phone to ring.

The delay continues to highlight a pattern of inconsistencies in the department's strategy of advising residents near coal ash dumps on the safety of their drinking water. After weeks of questions from WRAL News, DHHS officials have been unable to say why the agency gave different recommendations to homeowners – in some cases neighbors with similar levels of contaminants.

"There's so many facts they've lied about or spun or misconstrued," said Bill Moore, a resident near Duke's Buck plant who received letters declaring his water first unsafe, then safe again. "It just seems obvious they're in Duke's pocket."

His well tested for hexavalent chromium at 16 parts per billion. As of Tuesday morning, he hadn't received any new communication from DHHS officials.

"I would never trust the state again," Moore said.

DHHS has been tight-lipped on the well advisory process since state lawmakers began considering a bill that would formalize how health and environmental officials set standards for well water safety.

Messages left with two DHHS spokespeople were not returned Tuesday. Reached by phone, Williams said he wasn't available for comment and would have to set up an interview through the communications office.

But sworn testimony from Williams and his colleagues is revealing more about the apparent dissent among top scientists, health officials and regulators over the move to declare wells safe to drink again – although some of that dissent Williams disputes.

Instead, a team of toxicologists at DHHS used rules in state groundwater law to calculate a "health screening" level for hexavalent chromium of 0.07 parts per billion. That meant an increased cancer risk of one in a million.

Many of the wells exceeded that threshold, and over several months in 2015, hundreds of residents received letters advising them not to drink their water.

Williams noted in his testimony that, since those initial do-not-drink advisories were issued, officials at the Department of Environmental Quality and DHHS had an "inconsistency of views" about the screening threshold. DEQ Assistant Secretary for the Environment Tom Reeder, for example, has been vocal about the need for the state to be consistent with federal regulations limiting total chromium to 100 parts per billion.

"So, because of all that different information, there was a lot of communication among a lot of people about the appropriateness of our levels and issuing the 'do not drinks,'" Williams said in his testimony.

But he disputed claims from one of his subordinates, State Epidemiologist Dr. Megan Davies, that she and several members of the Division of Public Health staff verbally objected to a move to declare hundreds of wells safe to drink again in a March 2016 letter to residents.

Williams said "nobody objected" during a meeting about the revised recommendations that included Davies, Environmental Program Manager Mina Shehee and Division of Public Health Director Danny Staley. Davies said all three had expressed objections – although she did not specify they were made at the meeting.

"I came out of the meeting, and to this day, under oath, I will tell you that it was my impression we had consensus," Williams said in his testimony, noting that Staley was "totally on board."

He did note, however, that Davies disagreed with the letter to residents, specifically the first sentence that told residents their water "is as safe to drink as water in most cities and towns across the country," the vast majority of which have much lower concentrations of hexavalent chromium than many of the tested wells.

"I think, when you talk about consensus, I think that I certainly knew that Mina and Megan had opinions on this," Williams said, "and I think Megan said she was conflicted. So, I don't want to impart anything other than when I asked 'Is everybody OK with this? Everybody is on board with this,' that nobody objected."

Williams also disputed statements from Davies that the decision to declare wells safe was made partly because of fears of a potential backlash from state lawmakers – a claim he called "patently incorrect." Legislators had approached him with concerns that DEQ and DHHS weren't on the same page, but he said it was his staff that was more concerned about consolidating authority for well safety in one place because of the risk it poses for overlooking problems like those in Flint, Mich.

"And I respected that," Williams said. "But from my standpoint, if having well water in DEQ avoided this confusion, I was fine with that."

In Dukeville, the Salisbury area adjacent to the Buck plant, at least four well owners with hexavalent chromium levels higher than 10 parts per billion have received letters declaring their well water safe to drink.

Exactly how many others got those letters is hard to say, since DHHS hasn't tracked which well owners received the new guidance.

Williams said he decided a few days before the deposition in May that his division would re-issue do-not-drink advisories with phone calls to well owners with hexavalent chromium higher than 10 parts per billion "after it came to my attention that the groundwater standard for chromium was 10."

That realization, he said, was prompted by questions from WRAL News.

"Hopefully, that is happening today," Williams said of the phone calls in his testimony May 18.

As of Tuesday morning:

Like many of his neighbors, Moore said he's still using bottled water delivered every two weeks by Duke, and until his household gets connected with city water, a move both Duke and state lawmakers are considering, that's likely to continue.

"I have three grandchildren," Moore said. "We don't feel comfortable giving them baths."