Charlotte, N.C. — A State Highway Patrol trooper is in critical condition after a car hit him in Charlotte on Saturday, according to officials. He was hit in the same area where five people were also killed in a crash Friday night.

Trooper Adolfo A. Lopez-Alcedo was attempting to slow down traffic on Interstate 485 shortly after 8:30 a.m. when a car struck his patrol vehicle from behind, and his vehicle then hit him, according to the Highway Patrol. 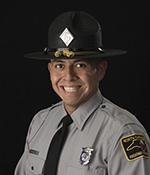 Lopez-Alcedo was taken to a Charlotte hospital with life-threatening injuries.

“Our Patrol family is hurting with the devastating news of Trooper Lopez’s injury, his family needs our prayers for what is undoubtedly an uphill fight,” Col. Glenn McNeill, commander of the Highway Patrol, said in a statement. “We will stand alongside our brother and his precious family in the hours and days to come and maintain hope that there will be a full recovery for this devoted public servant.”

The second crash caused the road to be shut down once again.

Friday's accident involved four vehicles and shut down I-485 near Oakdale Road to W.T. Harris Blvd.

This story originally appeared on WCNC, an NBC affiliate in Charlotte.