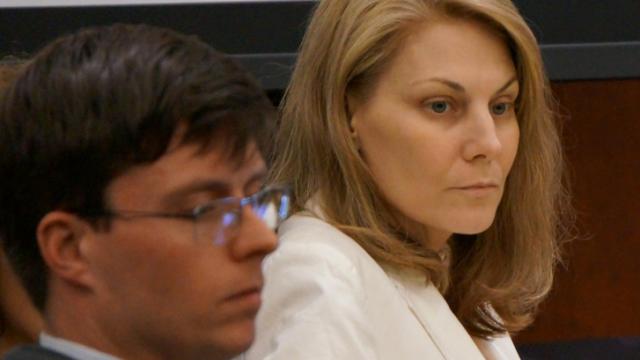 Raleigh, N.C. — A day after authorities say Laura Ackerson was killed at the Raleigh home of her ex-boyfriend, his wife – Amanda Hayes – bought several items that authorities say were used to cover up the crime.

Raleigh police homicide detective Jerry Faulk, the lead investigator in the case, said Monday that the 41-year-old was seen on a security video leaving a Target store after buying bleach, rubber gloves and other items that were later found in the couple's trash.

Faulk was the 45th witness testifying in Hayes’ murder trial for the state, which rested its case Monday. Over the past 10 days of testimony, it has sought to show that Hayes was angry at and resentful toward Ackerson, who was involved in a custody battle with Grant Hayes over the two young sons they had together.

Faulk said a large bleach stain was found on carpet near the foyer of the apartment, and there were a couple smaller spots near a hallway bathroom that he said was "obviously cleaner" than the rest of the home.

Amanda Hayes' adult daughter previously testified that the strong smell of bleach in the apartment was odd because bleach gave her mother migraines and she usually used vinegar to clean.

Authorities say Amanda Hayes also admitted to her sister that she killed Ackerson after the couple drove 1,200 miles from Raleigh to Richmond, Texas, and disposed of the 27-year-old's dismembered remains in a creek across the street from the sister's home.

A clinical psychologist who performed a court-ordered psychological evaluation as part of the custody lawsuit testified that the Hayeses acted and spoke as if they wanted to "effectively erase Laura as the children's mother."

It's unclear exactly how Ackerson died, but an autopsy found a sharp puncture wound to her fourth cervical vertebra of the spine and injuries that were also consistent with some type of asphyxia or blunt force trauma to the neck.

Defense attorneys, who began calling witnesses Monday afternoon, say their client had been controlled and manipulated by her husband to the point that she was forced to help him get rid of the body.

Amanda Hayes, they say, is not guilty of murder and didn't know anything about Ackerson's death until after they arrived in Texas. There, Grant Hayes threatened her if she didn't persuade her sister to help them, according to the defense.

Grant Hayes, the defense contends, used Amanda Hayes and was a dangerous "sociopath" who identified with the 1999 psychological thriller "The Talented Mr. Ripley," in which the main character kills those close to him and goes to great lengths to hide the crimes.

Superior Court Judge Donald Stephens, late Monday afternoon, denied the defense's request to play the movie for jurors, as well as 2004's "The Stepford Wives," but said attorneys could question their first witness, investigator Mel Palmer, about them since he had seen them both as part of his investigation.

Amanda Hayes, also charged with accessory after the fact to murder, faces life in prison without the possibility of parole if she's found guilty of first-degree murder.

Grant Hayes was tried and convicted last year and is serving life in prison for the crime.

His defense attorneys argued that it was Amanda Hayes who accidentally killed Ackerson during an argument and that he only helped cover up the crime to try to protect his wife.

"If you look at the facts of this case, (Ackerson's) body being found where it was found, (Amanda Hayes) involving her sister, this was Amanda's show," Grant Hayes said in a telephone interview last month with WRAL News.

"I'm not trying to give the impression that I'm pushing blame and responsibility off on Amanda. I was just as much invested in protecting my family as she was."

"I love my wife. I took a vow to protect my wife," he continued. "Laura got herself killed."