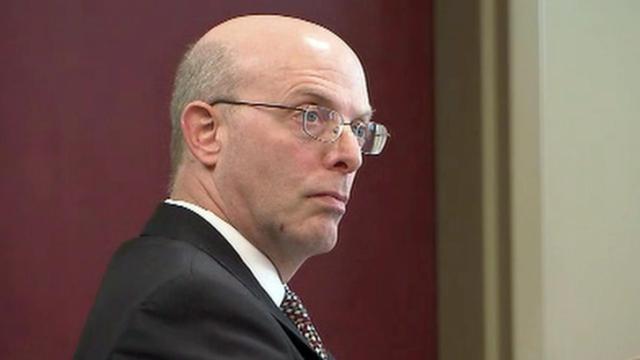 Raleigh, N.C. — The State Human Resources Commission ruled Friday that the State Bureau of Investigation wrongly fired a blood analyst almost four years ago and awarded him 30 months of back pay.

Duane Deaver should have been demoted, with his salary cut by 10 percent, instead of losing his job, the commission ruled. They ordered the SBI to rehire him, pay him what he's owed and then fire him again, noting that Deaver would have rightly been fired in July 2013, when the North Carolina Court of Appeals upheld a judge's ruling that Deaver misled jurors in the 2003 murder trial of novelist and one-time Durham mayoral candidate Mike Peterson.

In his nearly 25-year career at the SBI, Deaver went from being a rising star – he was the go-to guy for blood stain analysis – to being a lightning rod, the symbol of a system accused of withholding evidence.

A 2010 independent review of the state crime lab concluded that SBI analysts had misstated or falsely reported blood evidence in about 200 criminal cases during a 16-year period ending in 2003. Some of the most egregious violations found were linked to Deaver.

Deaver's lawyers argued that the SBI made him a scapegoat while the agency was under legislative and public scrutiny for the crime lab's policies and procedures, noting that SBI officials never included those allegations in their decision to fire him.

The agency cited the following findings to determine that he had violated agency policies:

In its 27-page ruling, however, the Human Resources Commission determined that the Innocence Inquiry Commission never found that Deaver had perjured himself in the Taylor hearing and that other SBI agents had been reprimanded, not fired, for inappropriate conduct in demonstration videos.

The panel said that the third allegation against Deaver wasn't enough to justify his termination. However, commissioners ruled that his actions in the Peterson case would have resulted in him losing his job.

Peterson was convicted of beating his wife to death in their Durham mansion in December 2001. Deaver was a key prosecution witness during the murder trial, refuting defense claims that Kathleen Peterson died in a fall down the stairs.

Superior Court Judge Orlando Hudson ruled in December 2011, however, that Deaver overstated his qualifications and the validity of his blood-spatter tests and ordered that Peterson receive a new trial. The Court of Appeals upheld the ruling, and the state Supreme Court declined to hear the state's appeal.

Peterson is still awaiting his retrial.

The commission's ruling can be appealed by either Deaver or the state. Deaver's attorney Philip Isley and SBI officials are reviewing the ruling, and neither side has decided whether to continue pursuing the case.