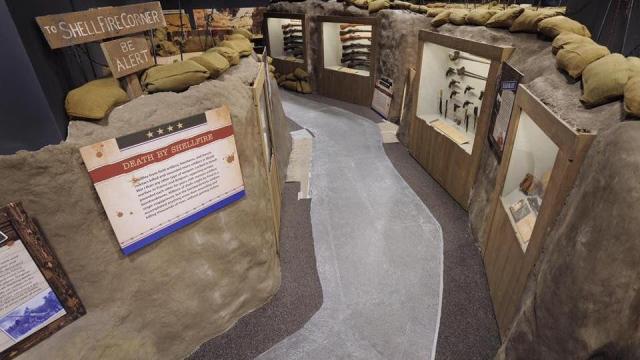 The N.C. Museum of History's exhibit North Carolina and World War I is breaking records.

By late last week, more than 203,000 visitors had walked through the exhibit, smashing through the previous attendance record set by a temporary exhibit at the downtown Raleigh museum.

That exhibit, "Real to Reel: The Making of Gone With the Wind," which opened in late summer 2012, saw 202,000 visitors during its eight-month run. By comparison, the World War I exhibit has drawn more visitors in less time. The exhibit opened seven months ago in April 2017. It is scheduled to run through January 2019.

“We’re absolutely thrilled that the public has responded so positively to this exhibit, breaking record visitation in the process," said Jackson Marshall, the museum's deputy director. "We’ve been especially pleased to see all the teachers across the state utilizing the exhibit as a teaching platform for their students.”

The 6,500-square-foot exhibit was planned, produced and built entirely in-house. It's believed to be the largest of its kind among state history museums.

The exhibit creates an immersive experience with interactive videos, mural-sized photographs, battlefield sounds and special lighting effects. A re-created battlefield environment – complete with seven-foot-high trench walls and cavelike “funk holes” – puts guests in the boots of Tar Heel soldiers on the Western Front. Designed for all ages, there is plenty here to keep kids engaged.

“What makes the exhibit so fun is that you can go through the trenches without reading any of the text labels and still get a lot out of it: there are videos and interactives, sound effects and surprises — like an exploding shell, or a periscope you can look through,” said Curator Jeanne Marie Warzeski in a press release.

The state museum welcomed more than 415,000 visitors in 2016 from all 100 counties in North Carolina, all 50 states and more than 50 countries across the world. Admission is free. It's at 5 E. Edenton St., Raleigh.