Raleigh, N.C. — As thousands of teachers rallied outside the General Assembly on Wednesday, Jason Gill roamed the halls of the legislative building, hoping lawmakers would spot his sign. Dressed in a purple T-shirt, differing from the sea of teachers in red, Gill had a simple message for lawmakers: Don't forget about state employees. We deserve raises, too.

"This is my current salary as an environmental specialist (at the state Department of Environmental Quality) – $40,525," Gill said, pointing to his sign. On one side of the sign, Gill wrote his salary under North Carolina's average teacher salary –$53,975 – and asked in black lettering, "Where is my 4.8% to 9.1% raise over two years, legislature?" 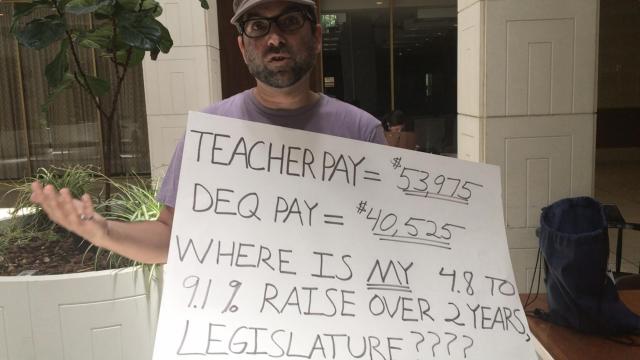 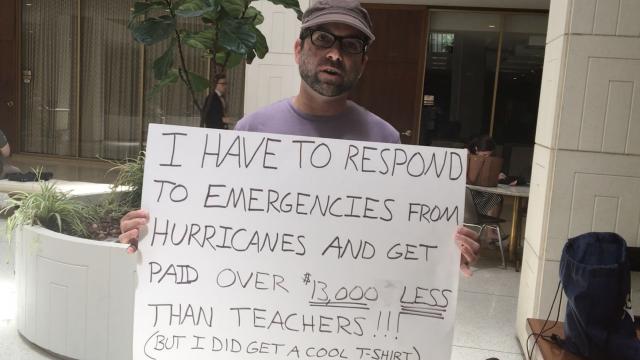 "It’s an important thing to bring attention to ... Teachers, yeah, given what they have to deal with, they deserve a pay increase," Gill said, noting that his mother was a teacher. "But we’re state employees, too, just like teachers are, and we’re being asked to do things that in some ways can be pretty dangerous and not, in my opinion, being fairly compensated for that."

As an environmental specialist, Gill said he visits construction sites and other projects throughout the state to make sure they aren't polluting property or waterways. He also responds during emergencies, especially during hurricane season, to make sure residents are safe.

"It’s a public safety service. So, we can be out there, not in the middle of a hurricane, but conditions are still pretty dangerous, to alert emergency authorities about any breeches of dams throughout the state that could jeopardize people downstream that day," he said.

Last year, lawmakers included 2 percent pay bumps for many state workers and even larger raises to get others to a $15-an-hour level. The State Employees Association of North Carolina called the House's current proposal "a slap in the face" and urged House members to vote it down.

"Closing prisons, shuttering hospitals or abandoning road projects to take to the streets is not an option for state workers," SEANC Executive Director Robert Broome said in a statement, alluding to Wednesday's teacher rally. "Our members deserve equitable pay and benefits. We’ll be at work [Wednesday], but make no mistake, our voices will be heard loud and clear on our own time."

Gill took a personal day off work to attend Wednesday's rally and said he hopes his voice, although small in the crowd of teachers, will make a difference.

"There are other people out there who are not getting the same recognition that teachers are getting," Gill said. "So I just wanted to let everyone know that we’re out there, too, and we’re keeping you safe and in a lot of ways keeping you alive and just maybe don’t forget about us when the next budget comes up."