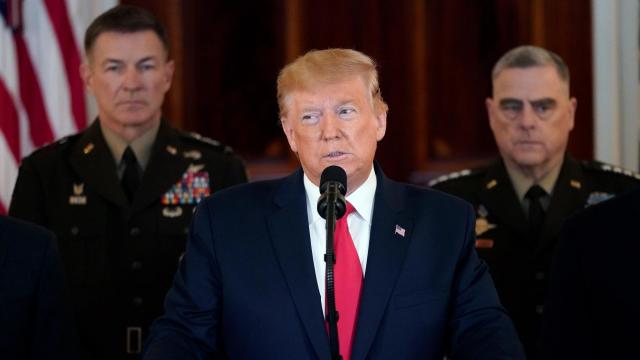 CNN — The Trump administration has abruptly canceled four classified congressional briefings related to the ongoing Iran crisis, in some cases providing little or no explanation for doing so.

The State Department called off two briefings that had been scheduled for Wednesday, Senate and House aides confirm to CNN.

Congressional lawmakers had been slated to receive a briefing on embassy security while the Senate Foreign Relations Committee had expected to hear from top State Department officials about the administration's Iran policy and authorities for the use of force before the last-minute schedule changes.

FBI officials had been expected to brief a group of House lawmakers on counterintelligence issues related to Iran on Wednesday in a separate closed-door session but those plans also changed at the last moment, according to two sources familiar with the planning. The reason for the cancellation remains unclear but the briefing was added to the calendar late last week, one of the sources said.

The FBI did not immediately respond to CNN's request for comment.

Additionally, the Pentagon scrapped Thursday's classified briefing on Iran for the House Armed Services Committee due to scheduling issues, according to a US defense official and House aide.

John Rood, the Defense Department's top policy official, had been expected to deliver that briefing. A spokesperson for the Pentagon said that the Department of Defense was working to schedule a time to conduct the briefing.

Congressional lawmakers were slated to receive a briefing on embassy security while the Senate Foreign Relations Committee expected to hear from top State Department officials about the administration's Iran policy and authorities for the use of force before the last-minute schedule changes.

The sudden briefing cancellations come as some lawmakers, particularly Democrats, continue to question the administration's justification for killing Iranian General Qasem Soleimani. Senators appear likely to rebuke President Donald Trump soon in the form of a vote on a war powers resolution to limit his military actions in Iran.

Wednesday's briefing on American diplomatic outposts was originally going to focus on situation in the African country of Burundi but the topic was changed to a global assessment of embassy security at the request of congressional staff after the strike that killed Soleimani.

An aide tells CNN the request of topic change was made January 7. The law requires monthly briefings for national security committees in both chambers on threats to embassies.

"This has not been rescheduled. We don't know why it was canceled," the aide said. "Staff is pissed."

The staffer told CNN there was no noticeable chill in the planning process for the briefing on embassy security after the State Department shifted the topic.

"They understood that this was a reasonable request," the staffer said.

Politico was first to report the embassy security briefing cancellation.

CNN reported on Monday that State Department officials involved in US embassy security were not made aware of imminent threats to four specific US embassies, two State Department officials tell CNN, further undermining Trump's claims that the top Iranian general he ordered killed earlier this month posed an imminent threat to the diplomatic outposts.

Without knowledge of any alleged threats, the State Department didn't issue warnings about specific dangers to any US embassy before the administration targeted Soleimani, Iran's second most powerful official, according to the sources.

The State Department sent a global warning to all US embassies before the strike occurred, a senior State Department official said and the department spokesperson confirmed, but it was not directed at specific embassies and did not warn of an imminent attack.

The State Department also postponed Wednesday's classified hearing on the administration's Iran strategy at the last moment as criticism continues to mount from Capitol Hill on the Trump administration's legal rationale for its strike against Iran's top military commander earlier this month.

"State 100% canceled the briefing. We know they will vaguely claim it was a logistical issue, even though this briefing had been already locked into the schedule for days," the aide said.

A Republican aide however downplayed it as "just a scheduling change."

"The briefers had a conflict and State has assured us that we will reschedule to have several hearings on Iran in the coming weeks," the aide said.

Brian Hook, the State Department's Special Representative for Iran, and David Schenker, Assistant Secretary of State for Near Eastern Affairs were expected to brief the Senate Foreign Relations Committee. Schenker returned from a trip to the Middle East last week that included a stop in Iraq.

Marik String, an official in the State Department's Office of Legal Adviser was also expected to brief the committee.

The State Department did not respond to CNN's request for comment regarding either schedule change.

Connecticut Democrat Sen. Chris Murphy suggested that the White House was behind the sudden cancellation of Wednesday's scheduled briefing for the Senate Foreign Relations Committee, of which he is a member.

"FYI the White House cancelled today's Soleimani briefing. But nobody from the intelligence community was coming anyway," he tweeted. "We need a full briefing on the 'imminent threat' intel - including the alleged embassy threats - now. If the President didn't make up the threats, prove it."

On Tuesday, Murphy led eight Democratic senators by writing to request a briefing from the Office of the Director of National Intelligence on the specific evidence underlying public claims from Trump and Secretary of State Mike Pompeo that Soleimani was planning imminent attacks on multiple US embassies.

A Democratic aide told CNN Wednesday that ODNI had not responded to the letter.