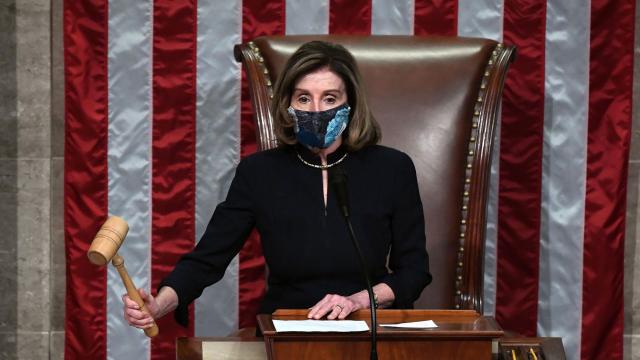 CNN — Senate Minority Leader Mitch McConnell is proposing that the Senate give former President Donald Trump's legal team two weeks to prepare for the upcoming impeachment trial and delay its start until February, the Republican leader told his conference on a call Thursday, according to multiple GOP senators.

McConnell told Republicans he's in no rush to begin the trial. His point was the House moved quickly on impeachment but the Senate needs time to prepare for a full trial.

House Speaker Nancy Pelosi on Thursday rejected Republican demands to back away from Trump's impeachment trial, even as she would not say when she would send the impeachment article to the Senate to begin the process.

The timing of Trump's Senate impeachment trial after the House impeached him on a single article last week is still unsettled. When it happens, the trial will grind Senate business to a halt, while the Senate is still struggling over hashing out a power-sharing agreement to govern a 50-50 Senate. Senate Majority Leader Chuck Schumer and McConnell are expected to discuss trial logistics later Thursday, multiple sources told CNN.

Another factor complicating the trial's timing: The question of who will represent Trump remains unanswered.

Pelosi said at a news conference Thursday that the House was "ready" to begin the trial but would wait until the Senate was prepared before formally transmitting the impeachment article, the step that would trigger the start of the trial the following day.

"They have now informed us they are ready to receive, the question is other questions about how a trial will proceed, but we are ready," Pelosi said of the Senate.

House Democrats are in discussions to send over the article of impeachment to the Senate as early as Friday, two sources say, but a complicating factor remains the fact that Trump still does not have a lawyer to represent him in a Senate trial.

"The articles could be walked over Friday," one source told CNN.

There are also discussions about how to ensure a trial can move quickly and not overwhelm President Joe Biden's agenda, but ultimately no timing has been finalized. Trump's lack of lawyers underscores the chaos that the former President is still injecting on Capitol Hill even after he left Washington on Wednesday before Biden's inauguration.

Sen. Lindsey Graham, a South Carolina Republican and ally of the former president, suggested in a conference call with Senate Republicans Thursday that South Carolina lawyer Butch Bowers will represent Trump at his impeachment trial, according to a person on the call. CNN has reached out to Bowers for comment.

Earlier, Graham told reporters that Trump would have his legal team in place "pretty soon" with "people that are competent and well-versed in things that, around situations like this."

"I would focus on the unconstitutional argument," Graham said. "They didn't present any evidence in the House, so I don't know if you can present evidence in the Senate that you didn't present -- I guess you could -- but we'll make our own decisions about did the President go too far, was this incitement under the law, what's the right outcome there? So it should be a quick trial really, quite frankly."

Republicans have urged Democrats to abandon the Senate impeachment trial of Trump, arguing both that it's unconstitutional and that it directly undercuts Biden's inauguration message of unity in the first days of his presidency.

Pelosi rejected those calls on Thursday.

"No, I'm not worried about that," she said. "The fact is, the President of the United States committed an act of incitement of insurrection. I don't think it's very unifying to say, oh, let's just forget it and move on. That's not how you unify. ... You don't say to a president 'Do whatever you want in the last months of your administration, you're going to get a get-out-of-jail card free.'"

Senate Democratic leaders say they don't know when the trial will begin, though Schumer pledged there would be a vote on whether to convict Trump on the House's charge of "incitement of insurrection."

"Leader McConnell and I are trying to come up with a bipartisan agreement on how to conduct the trial," Schumer said Thursday. "But make no mistake about it. There will be a trial, there will be a vote up or down on whether to convict the president. I believe he should be convicted. And we'll have to wait to see when she sends the articles over to figure out how to do all that."

Asked when the articles might be sent, Senate Democratic Whip Dick Durbin said it was still unresolved.

"Whether or not it's going to be a full blown trial with evidence and witnesses, or 'expedited' -- whatever that means -- that final decision isn't even close," Durbin added.

During Trump's 2020 impeachment trial, House impeachment managers focused much of their case on the need to have witnesses in the trial to corroborate their charges that Trump sought Ukraine's help to undermine Biden ahead of the 2020 campaign. That push ultimately failed, as Republicans voted against hearing witnesses before Trump was acquitted.

This time around, Democrats are eyeing a quick trial, given the fact that the Senate is likely to be stalled while the trial is ongoing -- meaning Biden's Cabinet nominees would be delayed in getting confirmed.

Democrats have yet to say whether they will seek witnesses for this trial, but Pelosi hinted Thursday they might not need to do so, saying the decision would be up to the managers.

"I do see a big difference between something we all witnessed versus information you might need to substantiate an article of impeachment based in large part on a call the President made and described as perfect," Pelosi said. "This year, the whole world bore witness to the President's incitement, to the execution of his call to action and the violence that was used."

House impeachment managers are meeting and preparing to make their case to the Senate, and Democrats remain hopeful they can convince 17 Republican to convict Trump, especially given the fact that McConnell has indicated he is keeping an open mind and will listen to the argument.

A faction of Senate Republicans, however, are warning McConnell that his backing will quickly wane in the Senate GOP conference if he votes to convict Trump.