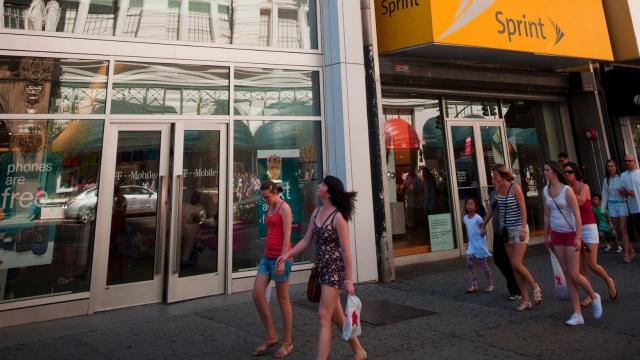 CNN — The $26 billion merger between T-Mobile and Sprint has been approved, ending a years-long attempt to combine the United States' third- and fourth-largest wireless carriers.

A federal judge ruled Tuesday in favor of the marriage allowing the two telecom giants to combine. US District Court Judge Victor Marrero said in his ruling that he didn't envision the companies "would pursue anticompetitive behavior" and rejected the lawsuit brought on by a dozen US states.

The judge said that Sprint on its own couldn't "continue operating as a strong nationwide competitor." Sprint is currently in fourth place, but the company claimed its path to deploying a nationwide 5G network without T-Mobile was uncertain.

States' attorneys general argued that approving the merger would make wireless service and prices worse for Americans. But Judge Marrero said he was ultimately unpersuaded by the states' economic theories and analytical modeling, writing that the two sides' claims ultimately came down to competing crystal balls. He said he was relying substantially on his own "skills and frontline experience" to reach a decision.

"How the future manifests itself and brings to pass what it holds is a multifaceted phenomenon that is not necessarily guided by theoretical forces or mathematical models," he wrote.

T-Mobile CEO John Legere called the ruling a "huge victory" and said in a statement that the new company, which will retain the T-Mobile name, is "great for consumers and great for competition."

The companies touted the merger's benefits, claiming lower prices, expanded 5G and new jobs. They said the combination will ultimately employ 11,000 more full-time people than the standalone companies would have over the next four years. They said an additional 12,000 jobs will be created to staff 600 new stores and five new "customer experience centers."

The merger could be finalized in early April. A new website has been started to promote the combined companies at NewTMobile.com.

To alleviate antitrust concerns, Sprint and T-Mobile have proposed a deal with Dish Network, which would buy some wireless assets from the companies to create a new nationwide carrier. The companies hoped that would remedy the merger's effects on the market. They also promised that prices wouldn't rise and accelerate the rollout of new, ultra-fast 5G mobile network.

Letitia James, the AG from New York, said in statement the reduced competition is "bad for consumers, bad for workers, and bad for innovation." She added the state will will examine a possible appeal.

California's AG Xavier Becerra said he is "prepared to fight as long as necessary to protect innovation and competitive costs."

The merger saga between T-Mobile and Sprint has been ongoing since April 2018 when the current deal was proposed. Federal regulators, including the US Department of Justice and the Federal Communications Commission, already approved the merger last year. The states were the final hurdle, and Sprint and T-Mobile battled for the merger's approval in a Manhattan federal court in December.

FCC chairman Ajit Pai said he was "pleased" with the decision. citing the companies' promise to expand 5G.

"This transaction represents a unique opportunity to speed up the deployment of 5G throughout the United States, put critical mid-band spectrum to more productive use, and bring much faster mobile broadband to rural American," Pai said in a statement. "This is a big win for American consumers."