Heavy rain from Hurricane Florence caused the Starlite Motel to crumble into the Little River. Now the water in the river is rising once again and has flooded homes on Brinkley Drive.

Mary Browning's family lost two houses and three cars to Hurricanes Florence and Michael. She says the rain this week is breaking her spirit.

See which NC rivers are expected to flood

"It never did anything like this, but in the past two months, it's been like one thing after another. I don't want to see no more water," she said.

Browning had hoped to move back into her home by Christmas, but she now knows that is not going to happen. She and her mother are staying nearby relative's home. 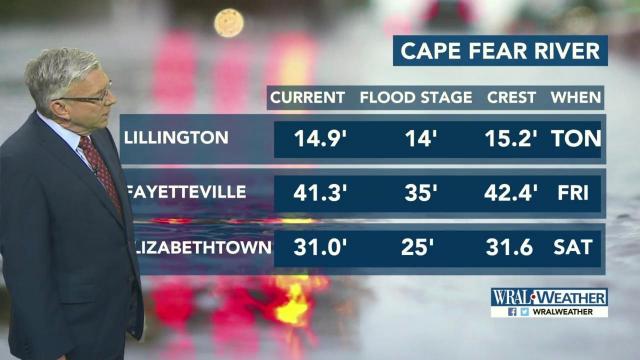 The National Weather Service issued a flood warning until Sunday for both the Cape Fear and Little rivers.

According to data from the National Weather Service, the Little River at Manchester crested yesterday at moderate flood stage - 24.79 feet. The Cape Fear River in Fayetteville was expected to crest Friday at 42.4 feet.