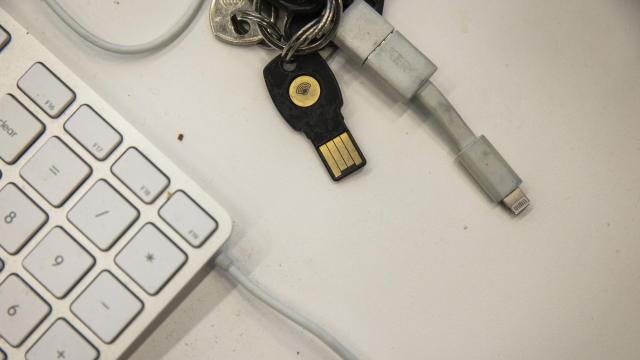 How do New York Times journalists use technology in their jobs and in their personal lives? Kevin Roose, a technology columnist in New York who has been writing about disinformation online, discussed the tech he’s using.

Q: As a technology columnist, what are some of your favorite tech tools for work?

A: For work, I use a company-issued MacBook Pro. I hate, hate, hate the keyboard on it, so I sometimes use an external keyboard, which makes me look incredibly cool at the coffee shop. But my only other option is using my MacBook Air, which is about seven years old, runs out of hard drive space every time I use it and has a battery life of maybe 20 minutes.

A few years ago, I got hacked really badly. (It was my own fault — I was hosting a TV show about tech and volunteered to have a few professional hackers attack me, as an experiment.) As a result, I’m pretty paranoid. I use physical security keys, VPNs, an encrypted email provider, and half a dozen secure texting apps to communicate with sources and colleagues.

I know I should be using to-do apps and bullet journaling, but I’m still pretty old school about taking notes. I carry a little brown Field Notes notebook in my shirt pocket, and I write down everything that could possibly be of interest — story ideas, errands to run, people I need to call, words I want to look up — in my atrocious chicken-scratch handwriting, in no particular order. When I fill up a notebook, I add it to a big pile on my bookshelf. I’m excited to reread them all when I’m old and nostalgic, and see some indecipherable interview notes along with 46 pages of “CALL WALGREENS.”

When I really need to get work done, I use an app called SelfControl, which blocks my access to certain potentially distracting websites for a set period of time. Mine is set to block Facebook, Twitter, YouTube and Reddit, and I usually set it for two or three hours at a time.

I also bought noise-canceling headphones this year, because my colleagues, God love them, are always talking on the phone with their sources. I’m pretty into a Spotify playlist called Focus Flow, which is perfect for drowning out their lovely, incessant yakking.

Q: What are some of the trade-offs of using this tech?

A: I like taking physical notes because I retain information better when it’s written on actual paper. The downside is that I spend a lot of time scrambling around my apartment looking for the notebook I left in a jacket pocket or under the sofa.

There’s also a definite trade-off between security and convenience. I probably spend 30 percent of my day typing in two-factor authentication codes. But I sleep better than I used to.

Q: You’ve been covering the spread of online disinformation in the run-up to the midterm elections. What is your advice for spotting disinformation? What tools do you use to do that?

A: A lot of spotting disinformation is hanging out in the right places. I spend a fair amount of time on Reddit and 4chan and in private Facebook groups where a lot of hoaxes and viral rumors tend to originate. I also rely on tips from our readers, who have been submitting hundreds of examples of disinformation from their own feeds. And Twitter (deep, heaving sigh) is useful, too.

Recently, I’ve also been spending a lot of time on Crowdtangle, a tool that allows you to see what’s spreading rapidly across Facebook at any given moment. (Crowdtangle used to be an independent company, but Facebook bought it in 2016.) I have a series of dashboards set up that allow me to monitor thousands of Facebook pages on different topics and see which false claims are being shared by which people and pages.

Q: What kind of election-related tech shenanigans have you seen recently?

A: There have been a fair number of shenanigans on social media this cycle — things like coordinated influence campaigns, fake Facebook ads, and hacking attempts on campaigns and think tanks. We’ve also seen new forms of disinformation, including the spreading of false claims over peer-to-peer texting apps.

Q: What are you doing to combat those annoying robotexts?

A: I actually haven’t gotten that many political robotexts. I do get frequent robotexts from a Caribbean restaurant in Queens, which I’ve never been to but whose promotional list I somehow got on. (I will make it to the Friday night fish fry soon, I promise.)

Q: Outside of work, what tech product are you obsessed with?

A: I cook a lot, and I’m still pretty into my Instant Pot.

I’ve also been working on my sleep recently, which is very Arianna Huffington of me. Recently, I bought a $15 noise machine on Amazon, which is a little hockey-puck-size speaker that has six or seven settings. You can fill your bedroom with jungle noises, or ocean waves, or crickets on a summer night. It’s phenomenal.

On the recommendation of several friends, I also bought a gravity blanket, which is weighted down with heavy beads. It’s meant for people with anxiety, but I just like the way it sits heavy on my body and prevents me from rolling over too much at night. I have the 25-pound version.

Q: What could be better about it?

A: I wish the blankets came in heavier weights.