Speaker: Joint judiciary review a go; judicial redistricting should be as well 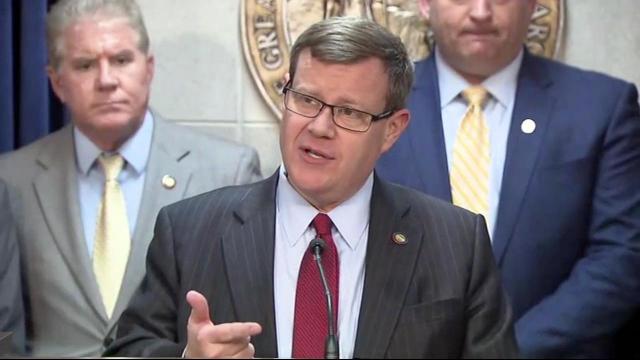 By Travis Fain and Tyler Dukes

Raleigh, N.C. — The House will go along with a Senate request to name a new joint committee to study judiciary reforms, but House Speaker Tim Moore said Thursday that he also expects the General Assembly to move this month on judicial redistricting.

That will take cooperation from the Senate, which for months has met in committee with a House-approved redistricting map in hand. On Wednesday, that committee voted to call for the joint committee review, lumping the House's redistricting proposal in with a Senate pitch to overhaul the way North Carolina selects its judges, moving from popular elections to a hybrid system of temporary appointments followed by retention elections to award full terms to judges.

It is too early, Moore told reporters, to say whether the House will support a move to appointments, something that would require three-fifths approval in both chambers followed by a statewide referendum to amend the state constitution. He said redistricting, to address constitutional concerns with existing maps, is the more pressing matter and should be handled in a special session that begins next Wednesday.

"One way or another, we need to finish it up before filing," Moore said.

Filing in judicial races is slated for June. It would have been in February if the General Assembly's Republican majority hadn't voted, over objections from Gov. Roy Cooper and other Democrats, to cancel judicial primaries this year.

Democrats have opposed most GOP-backed changes to the judiciary, accusing the majority of trying to rig the court. Proposed maps, according to Democrats who've analyzed them, would favor Republican judicial candidates. But Republican supporters say the current maps were drawn piecemeal, with political changes made over decades of Democratic control. Experts have expressed constitutional concerns with the current maps, though legislators acknowledged this week they know of no active court challenges to the district lines.

Republicans also voted this year to return to partisan judicial primaries, something a Democratic legislature had ended in the mid-1990s and early 2000s. But Republican changes have been no more partisan, GOP legislators have said, than Democratic ones were in the past.

Moore, R-Cleveland, said the legislature will meet Wednesday and, perhaps, Thursday of next week. Then it may take a week or two off to hash things out behind the scenes, he said. Senate Rules Chairman Bill Rabon said this week that he doesn't expect enough consensus to emerge to act on judiciary reforms this session, but Moore said he believes January will bring action on redistricting.

House Rules Chairman David Lewis, during an online interview via Facebook Live Thursday, said he wasn't "100 percent sure there's going to be new (judicial) districts." If it does get done, though, look for it to happen "no later than May," and "probably before then," Lewis said.

"This is still very much in flux," the Harnett Republican told those listening online.

Senate President Pro Tem Phil Berger told the Associated Press in a recent interview that the legislature is "definitely going to have to do something about the maps," but he didn't commit to the January timetable. Spokeswoman Shelly Carver said in an email Thursday that the timeline will likely depend on the new joint committee’s progress and recommendations.

There's no set end date yet for the January session, but once it ends the legislature is slated to come back into session in May. Leaders can always add session days, something they have done frequently in recent years.

As for the Senate's appointments proposal, Moore said Thursday that he hasn't counted votes on that in the House.

"It's one of those things folks sometimes have strong reactions, so we're going to respect where members are," he said. "Right now, it's only been talked about as a concept. But, as you can imagine, there are numerous ways it can be done."