Speaker gets social during voting debate

It's not every day you get a view from the Speaker's seat up on the dais in the NC House. Especially not on Facebook. And especially not during a hot debate over voting rights.

House Speaker Thom Tillis is Sometime around 5:00 this afternoon, as the two-hour Voter ID debate was underway, Tillis took the picture below, probably with his cell phone, and posted it to his Facebook page:

"A view from the Speaker's perspective live." 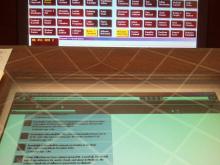 A little later, he posted the photo again for emphasis:

"Should anyone doubt that I'm posting live. Take a look at the view from my bench. FB [Facebook] on the lower monitor..." 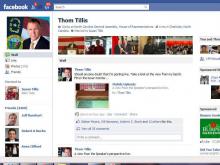 To be fair, lawmakers were ending their third day of grueling crossover debate. At that point in the Voter ID debate, many House members had left the chamber to wander the halls while their colleagues made speeches on the half-empty floor.

Tillis isn't the only lawmaker using social media in the chamber, either. Many members of both parties regularly tweet and facebook from the House floor. Former Democratic Speaker Joe Hackney used to read Twitter on the dais occasionally.

But is it appropriate for the Speaker of the House to be posting photos on his Facebook page during debate on one of the most contentious and sensitive issues of crossover week?

Tillis declined to be interviewed about this after session tonight – he wasn't feeling well, as was evidenced by his voice today.  But his spokesman Jordan Shaw said, "I don't think there's any problem with it."

"I think the majority of people would say it's a unique insight into how it works up there - a view from the Speaker's chair," Shaw said.

What do you think?