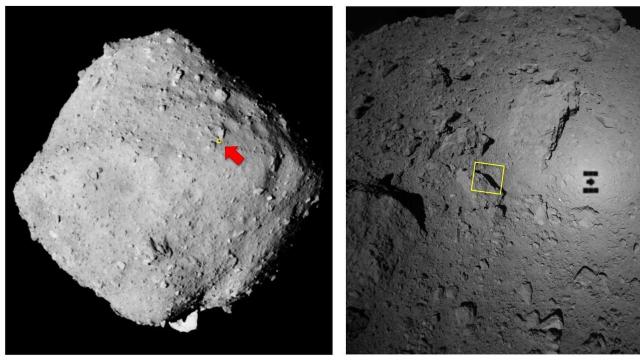 CNN — A Japanese space probe has fired a "bullet" into an asteroid as part of a mission to collect rock samples from the celestial body.

The projectile will disturb material from the exterior of asteroid Ryugu which will then float from its surface due to the weak gravitational field.

These particles will be collected by the probe and eventually brought back to Earth, according to Japanese space agency JAXA, which announced that the Hayabusa 2 craft successfully touched down on on the asteroid on Friday morning Japanese time.

JAXA scientists had expected to find a powdery surface on Ryugu, but tests showed that the asteroid is covered in larger gravel.

As a result the team had to carry out a simulation to test whether the projectile would be capable of disturbing enough material to be collected by what scientists call a "sample horn," which protrudes from the underside of the probe.

This video shows the success of a December 28 test, which green-lit the asteroid landing.

The team is planning three sampling events over the next few weeks.

Hayabusa 2 will depart Ryugu in December 2019 and return to Earth by the end of 2020 with its precious cargo of samples, which will be analyzed by scientists such as John Bridges, a professor of planetary science at the University of Leicester, UK.

Bridges, who was also involved in the first Hayabusa mission, told CNN via telephone that Thursday's event will be "nail-biting stuff" due to the extreme precision involved in landing on Ryugu.

"This is a significant mission," said Bridges. "Sample return missions are particularly exciting."

He told CNN that the Hayabusa 2 mission is interesting because Ryugu is a C-class asteroid which humans haven't visited before.

"One thing I'm pretty sure of is that it will throw up some unexpected results," said Bridges, who believes that information from Ryugu samples could make us think again about the early evolution of the solar system.

Beneath their desolate surface, asteroids are believed to contain a rich treasure trove of information about the formation of the solar system billions of years ago.

C-type asteroids, which are largely composed of carbon, are the most common variety of asteroids, comprising more than 75% of those currently discovered. The other two main types of asteroid are the metallic S- and M-types, according to NASA.

Ryugu is expected to be "rich in water and organic materials," allowing scientists to "clarify interactions between the building blocks of Earth and the evolution of its oceans and life, thereby developing solar system science," JAXA said.

If Hayabusa 2 makes it back to Earth on schedule it will be the first mission to bring back samples from a C-class asteroid.

JAXA scientists are currently racing NASA for that historic achievement, with the US agency's own sample retrieval mission due to arrive back on Earth in 2023.

Even reaching the asteroid is a massive achievement as it is the equivalent of hitting a 6-centimeter (2.4-inch) target from 20,000 kilometers (12,400 miles) away.

"In other words, arriving at Ryugu is the same as aiming at a 6-centimeter target in Brazil from Japan," said JAXA.