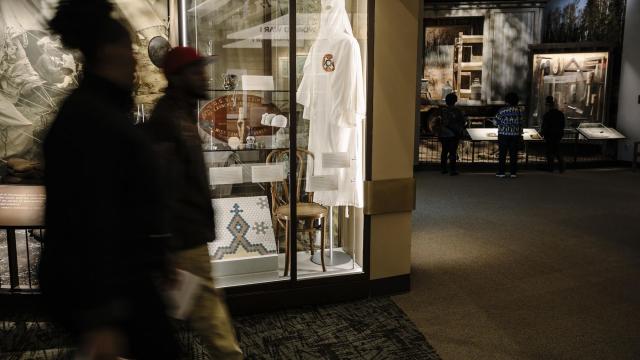 JACKSON, Miss. — The last time I visited this Southern city was in June 1964, Mississippi Freedom summer, when Northern college kids were traveling south to register voters, though that wasn’t why I was here. A high school sophomore, AWOL from home, I was on a cross-country bus trip from Boston, and Jackson was one of the stops. I wanted to meet Eudora Welty, who I knew lived there and whose early, playful stories I loved. My plan was to call from a pay phone, then drop by her house to say hi.

Welty’s writing, wry and linguistically zany, was the only version of “South” I knew, and it made me eager to go there. But by the time I reached Jackson, I was feeling uneasy. I’d seen “colored entrance” signs on public buildings and falling-down sharecropper shacks along the road. I’d also heard rumors that three civil rights workers had mysteriously disappeared. I hoped a meeting with Welty might be reassuring. But when I couldn’t find her in the phone book, and no one I asked knew her name, I caught another bus and moved on.

Politically, at this stage in my life, I was out of touch, insulated by privilege, aware only in a muffled way — through reading, mostly — of the racism that saturated American life. The trip started to change that. It triggered alarms that have never shut off. And I heard them loud and clear when I returned to Jackson to see the Mississippi Civil Rights Museum that recently opened here.

Its inauguration was one of three major cultural events celebrating the state’s bicentennial. A reconstituted Museum of Mississippi History — the original was lost to Hurricane Katrina — simultaneously made its debut in the same new $90 million building occupied by the Civil Rights Museum. And a large exhibition called “Picturing Mississippi, 1817-2017: Land of Plenty, Pain, and Promise” opened at the Mississippi Museum of Art.

All three presentations are visually strong, critically sharp, and thematically intertwined. But it’s the Civil Rights Museum that rivets attention. Its time frame — roughly 30 years between World War II and the mid-1970s — is narrow compared with that of the Mississippi history museum, or the National Museum of African American History and Culture in Washington. But concentration is a plus. It makes the Jackson museum’s energy feel combustive. So does the fact that, to a startling degree, and despite being a state-sponsored institution, the museum refuses to sugarcoat history.

And, finally, Jackson, a primary scene of that history, is the right place, karma-wise, for the telling of the history to unfold, as it does through a series of tight, low-lighted galleries packed floor to ceiling with photographs, texts, films and recordings. The material is magnetic. I had intended to make an initial fast sweep, then double back for a closer look. But an hour after starting I was still only halfway through my preliminary tour.

The back story to the civil rights period is the European slave trade, which arrived in what is now Mississippi with Spanish colonists in the 16th century, and expanded under French, then British, occupation. By the second half of the 18th century, white wealth was so completely dependent on black labor that a clause by Thomas Jefferson condemning slavery was struck from the Declaration of Independence.

By 1817, when Mississippi entered the Union, it had thriving slave markets in all its big cities, including Jackson. An 1858 poster advertising “One Hundred Negroes for Sale,” on display in the Civil Rights Museum, has the chipper tone of a supermarket flyer, assuring potential customers that “we will be in receipt of fresh lots every few days during the season.” From there, the museum’s timeline speeds ahead through the Civil War, Reconstruction and the birth of Jim Crow, then settles into a steady chronological groove after World War II. Black soldiers returned from abroad with eyes newly open to the extent of racism at home, and itching to push for change. White privilege, sensing a threat, took violent preventive action.

The record of that violence was already long, and now growing. A series of tall, signboardlike plaques in the galleries list the names of thousands of black lynching victims. One, 14-year-old Emmett Till, is singled out. He was tortured and killed in Mississippi in 1955 after being accused of whistling at a white woman. A funeral photograph of his brutalized corpse that appeared in Jet magazine is often cited as the spark that ignited the civil rights movement. The Washington museum has a major Till relic: his coffin, displayed in a shrinelike room. But the vintage copy of Jet on view in Jackson, open to the mortuary portrait, is just as moving.

Woven through documentation of violence in the galleries is a parallel record of resistance, throughout the South and specifically in Jackson. In 1961, nine African-American students from nearby Tougaloo College challenging segregation at Jackson’s main public library staged a read-in until they were removed by police. In the same year, anti-segregationist Freedom Riders arrived in the city, in successive waves, by bus and were herded into jails: enlarged mug shots of dozens of riders, among them veteran Georgia Rep. John Lewis, paper a gallery wall.

Behind much of the local protest was the organizational work of activist Medgar Evers, field secretary for the Mississippi branch of the NAACP, and a Jackson resident. On June 12, 1963, returning home from a night meeting, he was gunned down in his driveway. The museum has a terse, tense documentary film on Evers projected in a darkened alcove. At its conclusion, a spotlight suddenly hits an object in a case on the wall: the Enfield .30-06 caliber rifle that killed him.

The gun’s owner, Byron De La Beckwith, a white supremacist, was tried twice for the crime — both trials ending in hung juries. (He was convicted of murder in the case, 31 years later.) Three months after the second hung jury, in June 1964, three civil rights activists — James Earl Chaney, Andrew Goodman and Michael Henry Schwerner — were murdered in Philadelphia, Mississippi. A second film documents their disappearance and the discovery of their bodies later that summer.

The museum’s approach to these wrenching episodes is calculatedly theatrical, and effective. And so is an installation that serves as an antidote to them, a central rotunda-shaped space with a high-domed ceiling and clerestory windows that bring unfiltered daylight into the gloom. Portraits of civil rights heroes fill the rotunda ceiling; an illuminated sculpture pulses and glows; gospel songs play.

In the average art museum such features would feel unacceptably over-the-top. But this is a different kind of museum. Organized by the Mississippi Department of Archives and History under its director, Katie Blount, it is clearly designed for a digital-age audience, one accustomed to synthesizing a controlled chaos of words and images. And it’s a museum that privileges truth-telling, messy facts over clean-cut aesthetics. Fine art museums have a lot to learn from its example.

At least one, the Mississippi Museum of Art, has already taken up the challenge. The museum’s biennial show is a lesson in how objects from across eras, cultures and genres can be brought together to yield both ethical awareness and visual allure. The curator, Jochen Wierich, bridges the two straightforwardly. Setting Native American objects beside 19th-century paintings of European colonists with Indians cowering at their feet serves as a reminder — no label needed — that racial violence was a New World tradition here far in advance of African slavery. At the same time, an exhibition often startling in its political candor — I can’t imagine anything like it at the Metropolitan Museum — isn’t afraid to dwell on the region’s very real beauties, embodied by an 1823 Mississippi landscape painting by John James Audubon, or in a 1934 photograph of three chicly dressed African-American women on a Saturday stroll in Grenada, a city about 100 miles northeast of Jackson.

The photograph was taken by Eudora Welty, who worked as a photographer before she published her first short stories. As a pair, her witty picture and the idyllic Audubon landscape correspond pretty closely to my vision of “South” before the summer of 1964. As it turned out, this wasn’t a vision that Welty shared.

Only years later did I read her 1963 short story “Where Is the Voice Coming From?” Produced in a white heat just hours after she learned of the Evers shooting, it’s a first-person narrative set inside the assassin’s mind. Years later, Welty recalled, “What I was writing about really was that world of hate I felt I had grown up with, and I felt I could speak as someone who knew it.”

Welty died in 2001. I never did meet her, but recently, in Jackson, I visited her home, now a museum, and closed a circle in my memory. The Mississippi Civil Rights Museum offers no closure. The story it tells is still in progress: from 1960s Jackson, to Ferguson, Missouri, Charlottesville, Virginia, and the 2017 White House. That the new museum says this outright, and leaves us upset, its story unresolved, is what makes it work. We don’t need our museums — any of them — to calm us down; we need them to sound alarms.