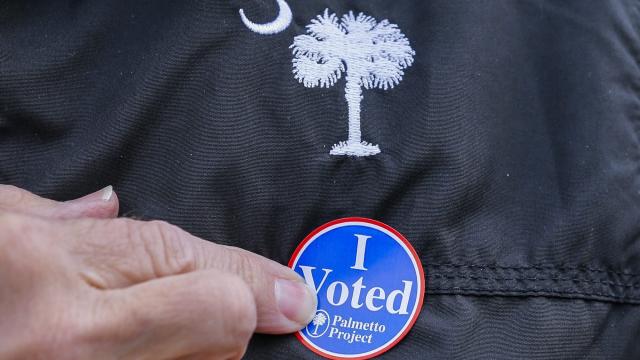 CNN — The South Carolina Republican Party executive committee voted Saturday to skip a presidential primary in 2020, leaving an open path for President Donald Trump to win all of the Palmetto State's delegates without competition.

The move reflects Trump's strong support within the GOP establishment and the party's voters as he heads into his reelection campaign, despite the fact that some Republicans have announced they are running or are considering a challenge.

Among those considering a run is one of South Carolina's own -- former Republican governor and congressman Mark Sanford, who is expected to make a decision on his run in the coming days.

Drew McKissick, the state party chairman, said the move will save South Carolina taxpayers over $1.2 million and cited that as an incentive for moving forward with the decision.

"President Trump and his administration have delivered for South Carolinians, and we look forward to ensuring that Republican candidates up and down the ballot are elected in 2020," McKissick said.

McKissick also said that this isn't the first time that the state party has decided to do this -- when former Presidents Ronald Reagan and George W. Bush were running for reelection in 1984 and 2004, respectively, South Carolina did not hold a Republican primary. In addition, the state party points to the South Carolina Democratic Party's decision not to hold primaries in 1996 and 2012, when former Presidents Bill Clinton and Barack Obama were running for second terms.

Former Illinois Rep. Joe Walsh, who has announced that he will challenge Trump next year, appeared on CNN on Saturday afternoon and was asked about the South Carolina Republican's Party decision.

"Clearly if you're President Trump and things are great and do you feel fine and you're strong, you wouldn't do this. They must be afraid of the fact that maybe he's not doing well," Walsh told CNN's Fredricka Whitfield. "This president is like a mob boss, and it's beyond disappointing. The Republican National Committee, the Republican party, that pretty much controls a lot of these state parties -- they're doing all of Trump's bidding. They worship him, they're like a cult as well as so many of his voters."

Party leaders in other states, including Nevada and Arizona, have expressed support for nixing their presidential primaries, and are expected to make it official over the coming weeks. Leaders of the Nevada Republican parties will meet Saturday to reach a decision, while the Arizona GOP Executive Committee will discuss its decision at a September 14 meeting. Kansas Republicans are also considering nixing their primary, according to Politico, which was the first to report on the moves by state Republican parties to cancel their primaries.

"This is nothing new, despite the media's inauthentic attempt to portray it as such," Arizona GOP Chairman Kelli Ward said. "Arizona Republicans are fired up to reelect President Trump to a second term and will continue to work together to keep America -- and Arizona -- great."

CORRECTION: This story has been updated to correctly identify in what years South Carolina's Democratic Party decided not to hold presidential primaries.