South African Party, Once a Symbol of Hope, Turns to a New Leader 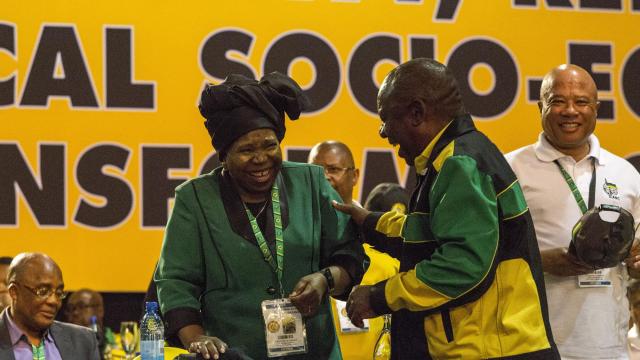 JOHANNESBURG — Nelson Mandela’s African National Congress once inspired hope across Africa. It helped liberate black South Africans from white-minority rule, promoting reconciliation with former oppressors and the ideal of a postracial “Rainbow Nation.” It seemed even poised to lift up the rest of the continent with its vision of an “African Renaissance.”

But as ANC members began gathering Saturday to elect a new leader, many analysts described the still-dominant party as a shadow of what it once represented — bereft of ideals, roiled by insiders fighting over diminishing spoils, abandoned by a growing list of disillusioned graying party heroes known as “stalwarts.”

For many at home and across Africa, the once heroic liberation movement is now synonymous with corruption and cynicism. South Africa has become a normal nation.

The winner of the party election is expected to become South Africa’s next president in the 2019 elections unless the ANC loses its overwhelming strength in Parliament, which selects the nation’s top executive.

Its present leader is President Jacob Zuma, who as South Africa’s head of state since 2009 has been at the center of a series of personal and political scandals. He will step down as head of the party after his successor is chosen, possibly as early as Sunday, at an elective conference in Johannesburg, the nation’s largest city.

Two front-runners are locked in a tight race to succeed him, embodying starkly different strains within a deeply divided party.

Nkosazana Dlamini-Zuma, a medical doctor and anti-apartheid veteran who served in several roles in previous governments, is also a former wife of Zuma. She has his support and that of many of his allies and has adopted his populist rhetoric.

Cyril Ramaphosa, the deputy president, has won the support of some of Jacob Zuma’s fiercest opponents: business groups and middle-class black voters in cities. His own record in business, however — as a former trade union leader whose ANC connections helped him become one of the country’s richest men — has made him a representative of the gulf between South Africa’s tiny new black elite and its poor.

Critics have focused on Zuma, 75, to explain the ANC’s precipitous decline. And Zuma, who has six wives and as deputy president was tried and acquitted on a rape accusation, makes an easy target.

But the problems go beyond just one man. Like other liberation parties in southern Africa, including those in Zimbabwe, Angola, Namibia and Mozambique, the ANC has never lost power since ousting white rulers and has come to focus on retaining that power and the access it provides.

In South Africa — where the economy has stagnated under Zuma — patronage and corruption have built a system that will be difficult to dismantle. In many of the ANC’s rural strongholds, the party remains the main source of business and jobs.

Nationwide, access to state enterprises has been the reward for Zuma’s allies, including friends with few professional skills and the Guptas, a wealthy family who have acquired widespread business interests.

State enterprises, through the awarding of contracts, or tenders, have created an entire class of ANC loyalists sometimes derided as “tenderpreneurs.”

“There is nothing exceptional in what has happened to the ANC because it is the path that all African liberation parties have taken,” said Ralph Mathekga, a political analyst. “It has failed to modernize from liberation politics to managing a complex modern society.”

“People personalize it to say it’s all about Zuma, but every post-liberation African society risks having a Mobutu,” he said, referring to Mobutu Sese Seko, the notoriously corrupt former ruler of Zaire, now the Democratic Republic of Congo.

“What makes this different is that people’s expectations of the ANC were higher because it was a latecomer and because of Mandela.”

Apartheid ended in 1994, well after liberation had swept the rest of the continent. Mandela served as South Africa’s first democratic president from 1994 to 1999. His successor, Thabo Mbeki — whose Pan-African vision was encapsulated in his phrase “African Renaissance” — was forced out of power in 2008 before the end of his second term by Zuma and his allies.

As the ANC and other liberation parties have remained virtually unchallenged, the nation’s fiercest political fighting has occurred inside the governing party. As ANC delegates from across the country converged in Johannesburg, the closeness of the leadership contest underscored the deep fissures inside the party.

Should Dlamini-Zuma win — and she has the support of the party’s youth and women’s leagues — most experts predict a continuation of the Zuma era. Analysts point out that Zuma, who is still dogged by a multitude of corruption charges, would probably be protected under a government she led. Dlamini-Zuma has adopted some of her ex-husband’s populist language, railing against “white monopoly capital,” the term used by critics of the concentration of wealth in the hands of white South Africans.

She has said that, as president, she would focus on “radical economic transformation” by redistributing the country’s wealth from whites to blacks and that she did not care about getting the backing of the country’s business groups.

“I’m not surprised white minority capital is not endorsing me,” she said last month.

Dlamini-Zuma has defended her public record — “I don’t loot government coffers,” she said — but she has said little about the widespread corruption under her former husband.

A victory for Ramaphosa, in contrast, would be likely to give the economy a quick boost and prevent a further downgrade of the country’s national sovereign debt, which has fallen to junk level because of Zuma’s efforts to gain direct control over the country’s treasury and other policies that have driven away investors.

Ramaphosa could also win back some black middle-class voters who, in recent years, have begun abandoning the ANC. Last year, in the greatest shock to the party since it gained power with the end of apartheid in 1994, the ANC lost control over the nation’s largest cities, including Johannesburg, Pretoria and Nelson Mandela Bay, after black middle-class voters disillusioned with Zuma’s ANC abstained from voting or jumped to the opposition.

A key negotiator in the talks that led to the end of apartheid, Ramaphosa was Mandela’s chosen successor as president. But after losing to Mbeki, Ramaphosa entered business, where his career has given him a more troubling legacy.

In 2012, in the worst killing of civilians since the end of apartheid, the police shot dead 34 wildcat strikers at a platinum mine in Marikana belonging to Lonmin, a company where Ramaphosa sat on the board.

An official inquiry into the massacre found that he had tried to intervene with the authorities on behalf of the company, though it eventually absolved him of guilt. Nevertheless, to many, Ramaphosa became the symbol of an ANC elite that had betrayed the people it once fought for.

Ramaphosa, who returned to politics in 2012, has pledged to fight corruption. But during the more than three years he has served as deputy president under Zuma, he remained largely silent on the issue and stood behind the president, though he has tried to distance himself in recent months.

Last month, in a speech on South Africa’s ailing economy, he said, “We must acknowledge that our ability to overcome these challenges has been undermined over the last decade by a failure of leadership and misguided priorities.”

Neither candidate has inspired people the way past leaders have done over the ANC’s 105-year history. Africa’s oldest liberation party, it once captured minds and hearts across the continent.

“For people in my generation, we grew up in the anti-apartheid struggle,” said Owei Lakemfa, a veteran labor activist in Nigeria, where many ANC leaders sought refuge before the end of apartheid. “The ANC held a lot of promise for us then. Now, it does not.”