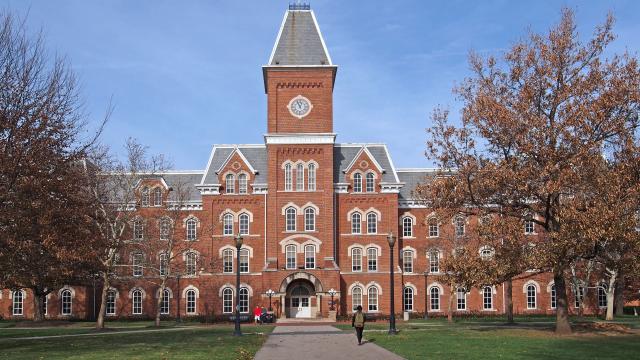 (CNN) — A judge has decided that a sorority sister who uses a service dog can return to live in the Chi Omega house at The Ohio State University for now, even though another sister claims that she's allergic to the dog and it's making medical conditions she suffers from even worse.

"The panic attacks restrict her breathing"

Madeleine Entine, a sophomore, sued the school's ADA coordinator for forcing her and her service dog to move. She says the school violated the Americans with Disability Act and the Fair Housing Act in making its decision.

Entine says she suffers from panic attacks, ones so severe they interfere with her daily activities.

"The panic attacks restrict her breathing ability and cause her to hyperventilate. They also cause her muscles to lock up and prevent her from walking on her own," court documents said.

So Entine gets relief from Cory, a service dog. Cory is trained to climb on her stomach and apply pressure. That helps bring her relief so she can restore her ability to breathe and move, court documents say. He also helps her have less frequent attacks.

"The two individuals are at odds"

At the start of the school year, Entine and Cory moved into the Chi Omega house. Just a few weeks later, another sister in the house began complaining about Cory, saying she was allergic to dogs.

Freshman and sophomore students are required to live either on-campus or in Greek housing. Since she's the Chi Omega chapter vice president, she lives in her sorority house.

Court documents say Cory exacerbates the other sister's "allergies and asthma, which, in turn, causes a flare-up of Housemate's Crohn's disease." According to court filings, the dog is regularly played with by others throughout the house.

The lawsuit does not name the other sorority sister.

The situation made its way to the university's Americans with Disabilities Act Coordinator, Scott Lissner, to intervene. Lissner determined that, "...over time, continued exposure to dog dander would ultimately be untenable and unsafe for Housemate."

Because of this conundrum, Lissner based his course of action on who signed the lease first: in this case, the sister with the allergy. OSU says they've used this same parameter in other cases.

So Entine was forced to decide: either move out of the sorority house or stay in it without Cory.

Entine claimed that the proposed solutions violated the Americans with Disabilites Act and asked if she could remain at the house, but with "physical parameters" that would allow separation between Cory and the other sorority sister, the complaint says.

In a letter to Entine's attorney Bart Keyes, OSU said that "Due to room configuration and house mechanical systems, it was determined that restricting the dog to a certain area or assigning the students to different living locations or rooms within the house would not accommodate the disabilities of both students."

OSU said it provided Entine an "offer of assistance from the University to make alternative housing arrangements, which she declined."

Ultimately, the university stood by Lissner's assessment, and Entine was given two weeks to make a decision.

In the federal suit filed by Entine, she maintains that this is a clear violation of the ADA, and quotes the federal regulations.

"Allergies and fear of dogs are not valid reasons for denying access or refusing service to people using service animals."

But Ohio State says the situation is difficult to manage.

The "case is not about whether plaintiff can have her assistance animal as a reasonable accommodation. She can. Instead, this is about how OSU, specifically Lissner, must accommodate two students with disabilities whose accommodations are in conflict."

US District Judge Algenon L. Marbley heard the case and issued a preliminary injunction, allowing Entine to remain in the sorority house with her dog until a verdict is handed down after trial. A trial date has not been assigned yet, Keyes told CNN.

The judge's decision was based on the fact that "Lissner did not perform the inquiry required under the ADA before disallowing the use of a service animal. In fact, Lissner did not even establish that it was Cory who aggravated the symptoms of (the other sister's) disability," according to the court documents.

CNN reached out to OSU, but officials said the university does "not comment on pending litigation." Calls to the Chi Omega sorority have not been returned.