Somewhere Between a Food Truck and a Food Tent, You’ll Find a Cubert 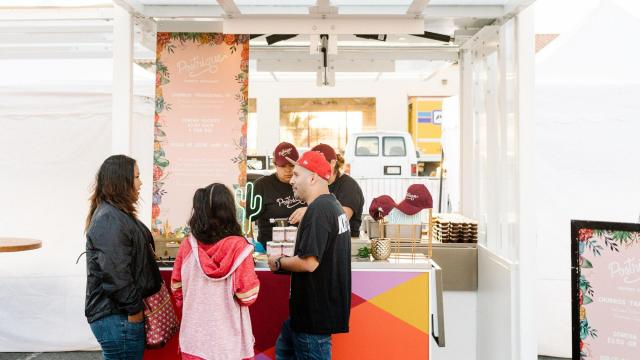 Elizabeth Miranda’s food dream centers on churros, and her goal someday is to have a brick-and-mortar bakery where she can sell them along with her “reimagined” versions of other traditional Mexican pastries. For now, she settles for a stall at one of San Francisco’s outdoor markets.

Matt Cohen’s food dream is the Cubert Cold Prep, a portable, collapsible food preparation stall, 8 feet square, that is delivered to the site, then cleaned and picked up for storage at the end of the day. This liberates people like Miranda from having to haul around the usual market inventory: a wobbly card table, a fabric canopy, coolers full of ice, food cooked at an off-site kitchen, cleaning products and storage racks, all of which require hours of setup and shutdown.

The Cubert, more than three years in the making, is Cohen’s attempt to make the risky business of feeding people less so by reducing the price of admission from the “typically prohibitive” levels he sees for restaurant rents and food truck costs.

It will debut officially at the Fort Mason food market in March and will rent for a daily fee (yet to be determined) to Bay Area vendors who participate in food markets run by Cohen’s company, Off the Grid. Other vendors will pay a flat daily fee of $500.

The base purchase price of the Cold Prep is $65,000 each for a minimum order of three — about the price of a new food truck, but with three locations (instead of just one) and none of the maintenance required by a kitchen on wheels. Vendors outside the Bay Area will be able only to buy, not rent, unless there’s enough demand for Cohen to create an additional transportation hub. He has 20 Cuberts ready to go and plans to build the rest to order, with a six-week lead time; he hopes to have so many orders that six weeks quickly becomes a struggle.

Cohen envisions a national network of Cuberts in office lobbies and public plazas, or open spaces in retail malls — any place a vendor might encounter hungry people. So far he has one committed client, Stumptown Coffee Roasters, which in partnership with Google has ordered a customized Cubert with the power to run a La Marzocco espresso machine. Stumptown will start providing coffee service at Google’s headquarters in Mountain View, California, early in the new year.

But like Miranda, Cohen had to attract attention first, which is how she ended up using a prototype for her startup, Postrique, at his company’s Fort Mason food market in San Francisco on Oct. 20. Cohen, who founded Off the Grid in 2010 to revitalize the city’s mobile food scene and stage private and corporate events, will use Fort Mason as a Cubert showroom: Fifteen vendors who previously used tented stalls will get to rent a Cubert instead. For the fall test drive, an Off the Grid employee drove the Cubert to Fort Mason on a flatbed truck, unfolded it, extended the flap that shields customers from inclement weather and made sure that the self-contained sinks and refrigeration unit were working. Miranda, a 26-year-old baker, arrived later that morning with her ingredients and a deep fryer that she connected to the unit’s generator.

When she was done for the day, she went home. The Off the Grid driver cleaned, folded and loaded the cube back onto the truck, and drove it to a storage space.

Mobile food service has grown exponentially since Los Angeles chef Roy Choi hit the road in 2008 with his Koji Korean barbecue truck; there are now more than 4,000 food trucks nationwide, according to the market research firm IBISWorld.

The temporary-stall model has grown as well: For the last two years, Cohen — who started with three markets and now runs 15 (with as many as 60 weekly events in the March-through-October season) — has fielded about 350 applications for eight or nine open slots at Fort Mason alone.

Jon Feldman, Stumptown’s vice president in charge of wholesale accounts, sees potential for growth at sites where specialty coffee couldn’t go before. “It’s hard to do what we do from any old place: power and water requirements, space constraints,” he said. “With Cubert you can open a small coffee outlet in the middle of a field,” for, say, a music festival.

Brian Lewis, senior vice president for retail development and curation at Kilroy Realty Corp. in San Diego, plans to install a Cubert in a San Francisco office building early in 2018, to see if it can revive a moribund corner of a ground-floor plaza. He wants to replace a cafe in a Santa Monica, California, property with one as well, betting that the Cubert can give older properties an edge in what he calls “an all-out amenities war with our competition.”

If big companies bite, Cohen will be able to expand his transportation and support network beyond the Bay Area, though he is quick to reassure potential customers outside the region that hiring “a flatbed truck isn’t a big thing,” and that Off the Grid is ready to help purchasers find a local transport company. He is already thinking about ways to improve the basic Cubert, including climate control to make them cooler in the summer and warmer in the winter.

It’s a tantalizing notion to anyone who sells food outdoors, which includes farmers as well as purveyors of prepared foods. Michael Hurwitz, director of Greenmarkets for GrowNYC, was excited about the idea before he ever saw a photo of the Cubert. He thinks that farmers’ markets are ready for a gut renovation.

For now, Miranda is grateful simply to have been awarded a Cubert at Fort Mason in the spring, as a way of thanking her for trying it last fall. The cube made her life “so much easier,” she said, and made her dream of a bakery seem within reach.

“It would be a huge next step,” she said. “It’s not quite a food truck or brick and mortar, but it’s not a tent outside. It has a little more of that brick-and-mortar feel.”