Somewhere, Away From It All 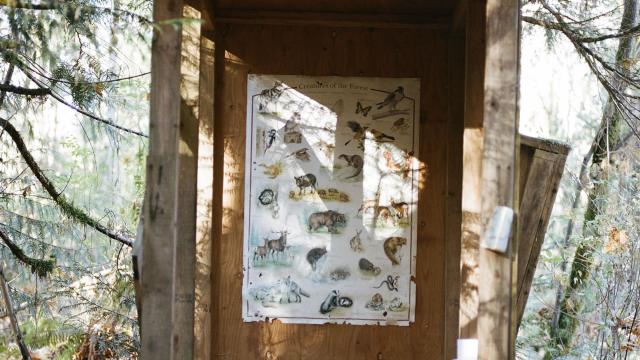 OLYMPIC PENINSULA, Wash. — Somewhere on the Olympic Peninsula, which extends from the northwest coast of Washington, a community has chosen to live independent of the public supply of water, electricity and other utilities on which most residents rely. Linked by a diffuse network of shared friends and land, they would be impossible to locate without insider knowledge. Dense forest obfuscates their dwellings — tiny houses, trailers, a landlocked houseboat — often accessible only by dirt roads or footpaths.

Water and mist frame the peninsula, with the Pacific Ocean to the west, the Strait of Juan de Fuca to the north and the Hood Canal to the east. The community here emphasizes the importance of this landscape to their livelihood. Not only do some draw their water for dishes and bathing from the creek down the hill, but many are also financially sustained by the land, working as farmers, fishermen and gardeners.

Though the members of this community all know each other, they reside in scattered locations — some shared, some individual. Several of the residents have an interest in anarchy and far-left politics, but there are no explicit ideologies that govern the inhabitants. Instead, they abide by unwritten guidelines of shared emotional and physical space.

These extend to, as Chris Gang, 30, tells it, “the idea that you can pee anywhere at any time. What comes along with that is a process of feeling less internal shame around what’s going on with your body, that there are parts of your body that are supposed to be private.” The compost toilet, in full view of the main cottage, illustrates his point (though there is a door installed for those who prefer privacy).

Gang, who has dramatic brows offset by bleached hair, believes that a resistance to bodily shame resonates with a longer history of queer intentional communities. “Queers have been creating chosen families forever, to the extent that we’ve been out of societal structures forever,” he said.

Maxfield Koontz, 28, a genderqueer farmer and basketry artist, also points to this history, deflecting the misunderstanding that “rural” and “queer” are incompatible identities. Soft-spoken and elegant, Koontz brought up the Radical Faeries movement. A countercultural organization founded in the late 1970s by Harry Hay, Radical Faeries advocated the formation of rural back-to-the-land queer sanctuaries, many of which still exist.

These themes echo Lauren Field’s photographic body of work, which explores sites of queerness and the sublime, as in images of trans friends perched, contrapposto and Venus-like, along the California coast.

Koontz’s sweetheart, Ezra Goetzen, 35, lives across the woods in a tiny house, poised on the slope of a lush gully. A transgender/genderqueer psychotherapist who splits time between this tiny cabin and a family home in Seattle, Goetzen was born in Poland and has the careful articulation of someone who learned English as a second language, punctuated by theatrical flourishes. Goetzen said that what keeps people from pursuing an off-the-grid lifestyle is “this really puritanical, overly hygienic life.” People think, Goetzen said, that they will “get sick from looking at a compost bucket.”

For many, the decision to leave the grid is born out of economic necessity; urban areas become uninhabitable, as both the resources and the number of people who can afford to have access to them dwindle.

The influx of wealthy outsiders from Seattle and elsewhere has created a housing crisis for residents of the Peninsula, who often cannot afford to purchase the land that has sustained them. This inequity affects those who live on the grid as well, including Lex Helbling, 29, a farmer who was forced out of a deal to purchase her rented farm from her landlord.

“Money is so powerful,” Helbling said. “Money, power and class drove the landlord’s decision. They wanted to think about farming as the picture they saw on the milk carton — beautiful, green grass, sunny all the time.”

Over the duration of Field’s project, the fallibility of the description “off the grid” became apparent. Beyond the fact that some of those pictured do have limited access to various water and power supplies, the phrase suggests a total exit from society and a life of isolation.

Emmy Madav, 31, instead emphasized the intense, even abrasive forms of intimacy that living in this way instigates: “It’s funny, because most people think of rural living as really isolated, and I feel often overwhelmed and overstimulated [by] the amount of people in that little house.”

Others noted the systems of privilege that allow them to live in this way. Goetzen acknowledged the erasure of indigenous genocide inherent in some modern homesteading movements: “It’s important to note what the native tribes were doing here before, that they’re still here, that this kind of semi-utopia we’re building is on settled, colonized land.”

Eight federally recognized tribes reside on the peninsula, physically relegated to narrow strips of reservations, mostly along the peninsula’s west side. The residue of colonial violence marks the map: Western explorers renamed various landmarks with Anglicized, altered versions of their traditional indigenous names.

Sacha Kozlow, 35, is a blacksmith living in a tiny cabin he built, insulated with animal hides. Chewing on a eucalyptus toothpick, his dog draped around his shoulders like a shawl, Kozlow recounted his upbringing in a cult in rural Montana.

During his youth, he said, cult leaders preached the myth of Atlantis, submerged into the ocean when its people courted homosexuality. Kozlow’s early years, as a young transgender boy not yet out, evince the cruelty of allegory, the threat at the heart of any “semi-utopia.”

“Utopia” comes from the Greek “ou-topos,” or “no-place.” It promises a paradise lost, defined by nonexistence. Many of the people Field photographed emphasized the temporary nature of living in this way, the gift of transience hemmed by the threat of eviction. Mobility, which is something like freedom, allows the construction of ephemeral utopias, no-places, gone by morning.