Raleigh, N.C. — Why did the turtle cross the road? Most likely, it was just trying to get to the other side -- but sometimes turtles get injured in the process.

The team is a veterinary-student run organization that started in 1996. Students provide medical, surgical and husbandry services to wild turtles in hopes of later releasing them back into the wild.

"We've seen about 7,000 since the beginning [of the rescue team.] In a busy year, we're seeing over 500 turtles," said Dr. Gregory Lewbart, a professor of aquatic, wildlife and zoological medicine at N.C. State that also oversees the Turtle Rescue Team.

Members of the rescue team said the most common turtle they see is the Eastern Box turtle, which is North Carolina's state reptile.

"If a turtle walks in right now, we know it's got about an even chance to be released into the wild. If it lives a day, or 24 hours, that jumps up to about 65 percent," said Lewbart.

"Aside from regular trauma, we see a lot of predation injuries - which is dogs going out and thinking turtles are toys - we see a lot of oral abscesses and fish hooks," added Turtle Rescue Team President Christian Capobianco. 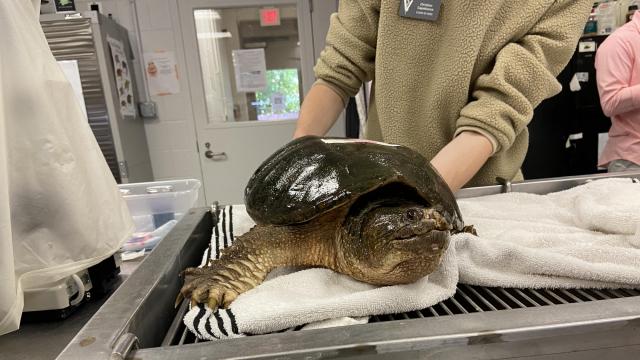 The Turtle Rescue Team has a student on-call from 8 a.m. to 8 p.m. which people can call or text to receive help about an injured turtle. But, team members also have tips for those who have found a turtle.

Or, if you see a turtle crossing the road -- you can help them cross the road, but keep them going in whatever direction they were traveling. Often times, the turtle isn't lost, since turtles typically live their entire life within a 1-mile radius.

"People obviously have good hearts, and they see wildlife and they want to care for it, but not all turtles needs to be seen," said Capobianco.

There are turtles that do need help, and the Turtle Rescue Team has seen its share of success stories over the years.

One of the biggest success stories is Funfetti, a common snapping turtle, that came to the Turtle Rescue Team with a severe spinal chord injury from being hit by a car.

"We decided to give him a shot. He was still eating and he was still feisty, so, we were like, 'Let's see how this goes for a couple of months,'" recalled Lewbart.

Funfetti ended up being with the Turtle Rescue Team for over a year-and-a-half while he recovered from his injuries.

"He continued to do so well. He was so strong ... We got him to a point where he was actually able to move his back legs and he was releasable," said Lewbart.

Along with rehabilitation, students in the organization also do research on the turtles.

Lewbart said that since the beginning, the organization has published around 20 papers out of cases they have received.

That research has helped students develop the use of bra hooks to help repair turtles' shells.

"We pioneered the use of bra hooks to kind of glue onto the shell, said," said Capobianco. "We use wire [and] wrap it around ... that's another thing we need frequently at Turtle Team is bra hooks."

Along with veterinary and undergraduate students -- the rescue team relies on help from the community. 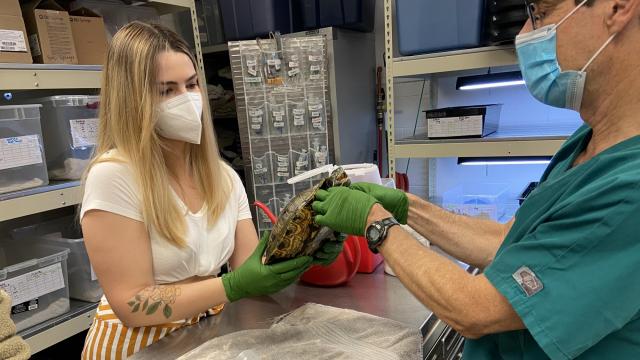 "We have a team of community members that are donating to us. All of our produce tends to get donated. We get rocks, enclosure materials donated," said Capobianco.

The rescue team also relies on community members to help turtles finish out their rehabilitation.

"We have a whole group of community members that are Turtle Rescue Team rehabbers," said Capobianco. "They been doing this for years and they know what they're doing. So, if we have any turtles that no longer need treatments in the lab, we like to fee up the space in the lab for our critical cases."

The turtles will still receive check-ups while with community members before being released back into the wild.

Once a turtle is ready to be released, rescue team members will try to release it as close as possible to where it was found.

"If we drive them somewhere they've never been, they're going to get really confused and stress. So, we like to make sure they go right back where we found them," said Capobianco.

Sometimes, a turtle that comes into the rescue team will be pregnant. But, that's not a problem at all for Turtle Rescue Team.

If rescue team members notice that a turtle has eggs, the turtle will be given material to feel comfortable laying their eggs. Then, once the eggs hatch and the baby turtles are ready to make their way back into the wild, it will be released where it's mom was found.

"We have pretty good success with getting those eggs to hatch," said Capobianco.

Being involved in the Turtle Rescue Team gives students a chance to work with more 'exotic' animals.