Some Tiny Crimes of the Heart 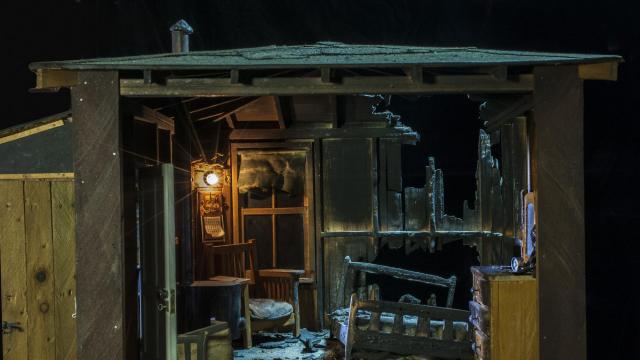 WASHINGTON — I would make a lousy detective. This became as clear as a bloody footprint to me last week, as I walked through “Murder Is Her Hobby” at the Renwick Gallery of the Smithsonian American Art Museum, an exhibition of 19 miniature crime scenes created by Frances Glessner Lee in the 1940s and ‘50s as training tools for police investigators.

The models, meticulously handcrafted by Lee, are known as “The Nutshell Studies of Unexplained Death.” Nearly all are owned by the Harvard Medical School and on loan from the Maryland Office of the Chief Medical Examiner, where they live, and continue to teach, some 70 years on.

I encourage you to drop what you’re doing and go to see them, before they go back into seclusion after the show closes on Jan. 28. The Nutshells are not only ingenious devices for the instruction of crime scene examiners, they are a body of imaginative work that would have established any artist’s career and place in art history.

Lee was not a schooled artist. She was a rich, frustrated woman in her 60s when she began them, and almost belligerent in her pursuit of a place in the infant field of forensic science. Lee shared its passion about the deceptions of crime and the need for truth in investigation. Entry to this professional realm was a double-locked door: men, and in particular police, held the keys. The majority of the victims in the Nutshells are women, found in their homes.

Lee’s minute scenes — the scale is 1 inch to 1 foot — are composites of actual cases, cleverly constructed to present a complex set of conflicting clues. Depicting everything from potential murder to suicide to accident, the Nutshells’ life and death subjects quickly eclipse their size. With their dollhouse detail, they are quaint, comfortably familiar. They are also an American tragedy: working men, housewives, babies in their cribs, the down-at-heel, the upright and elderly, families, lonely-hearts. A portrait of postwar American life.

All dead, or killers.

At the Renwick, flashlight beams crisscross the darkened galleries: You have entered a crime scene. The museum provides flashlights to encourage visitors to investigate each Nutshell, casting a cold eye into every small corner. Under the amber glare, every overturned chair, every rocking horse, looks frozen by violence.

The Nutshells are whodunits without a “who,” though. They were created to train investigators to observe, weigh and prioritize evidence, and to ignore false leads, hasty conclusions, assumptions and bias. Each scene includes a variety of evidence, motives and potential perpetrators. "Answer sheets” involving specifics of the historical cases cited in the Nutshells are kept under lock and key at the Medical Examiner’s office. Lee wrote fictitious police reports and witnesses’ statements to accompany each invention.

I walked the show with Jenifer Smith, director of the Department of Forensic Sciences in the District of Columbia. I learned a great deal from Smith, most of which I hope never to have to know.

“Blood splatter can give you indications of the direction that the blood drops, right?” Smith said, peering into “Three-Room Dwelling” with me, the largest and most complex of the Nutshells. Three people are bloodied and dead in their beds: The Judson family — husband, wife and baby. Splatter punctuates the wallpaper.

The report explains that a carpooling neighbor, Paul Abbott, claims he tried to pick up Robert Judson for work. Blowing his horn, he got no answer; he drove to the factory without him. Mrs. Abbott, watching, gets curious, checks on the Judsons, sees blood through a kitchen window and calls the police.

“Sometimes if a weapon is used, there’s castoff patterns you get as you bludgeon somebody,” Smith continued, illuminating the scene with her flashlight. “Not on the first hit — because the first hit, there is no blood; the head has to bleed — it’s on subsequent hits.” Noted. “Paul Abbott did it,” Madison Leon, a student at the Art Institute of Chicago, declared to me later that day, standing over the scene. Leon took one sniff and smelled a rat. “I think Mrs. Abbott was having an affair with Bob Judson. Why would she have any reason to know that he didn’t go to work with her husband? She was watching out the window. I think she heard something — why would you just watch for your neighbors?” Leon gave her theory a spin, and it fell into place like a ball on a roulette wheel. The cracked closet door, the open window.

But then ... “What about the undisturbed bottles of milk on the porch, by the window?” Smith had observed earlier. “That’s unusual.” She took measure of the tiny clues. “You’re looking for unusual, right?”

What I would consider unusual is a dinner reservation at 8:00. What Smith considers unusual is a breakfast that nobody has eaten, and a rifle beside it.

In “Kitchen,” the unusual and usual literally furnish the room. A pie is in progress, with bowl and rolling pin on a table. The sink is piled with pots and pans. A door has been sealed shut with newspaper. A housewife in an apron, with an ice tray at her side, is dead on the floor before an open oven. The handles on the gas are turned on. The husband’s statement: He left on an errand, came back, the door was locked, he saw “what appeared to be” his wife through the window and called the police.

“Kitchen,” like many of the Nutshells, recalls the director Alfred Hitchcock’s comment on his technique of dropping death into “normal, complacent, everyday life.” A motel shower, a sleepy coastal village. Dark things seem darker in bright settings. He and Lee were contemporaries. Noir had become a point of view. Lee grew up reading Sherlock Holmes, who first appeared in print when she was 9.

Her own biography reads like a piece of popular pulp: Born in 1878, heiress to the International Harvester fortune, tutored at home in Chicago in a stark, stone mansion, designed by H.H. Richardson, that one critic called “pathologically private.” Denied higher education by her parents, she married at 19 to a man she barely knew, left him twice and divorced him after 16 unhappy years, with three young children. Her father — the “jailer” of her girlhood — sent them all to Santa Barbara in disgrace.

“This has been a lonely and rather terrifying life I have lived,” she wrote in a letter, at age 73.

The great light of Lee’s life was George Burgess Magrath, a medical student and friend of her brother’s at Harvard. Magrath, who would later become the Medical Examiner for Suffolk County in Massachusetts, showed respect for her interest in legal medicine and forensic science and made important introductions.

“If you’re one of the first women,” Smith said of Lee’s involvement in the field, “you probably had to have somebody — some gentleman at the time — invite you to the table. We can all point to that in our careers.” Something of an anomaly when she started out in the 1980s, Smith now directs a department of 56 crime scene scientists that she estimates is 70 percent women.

Nothing is unique, but the Nutshells come close. Lee’s obsession with the ordinary becomes extraordinary. Corpses wear underwear beneath their clothes. Lee added her own details to specific crimes to make the stories more universal.

Through seminars with the Nutshells, taught at Harvard to invited investigators, she eventually became something of a cult figure, collegial with celebrated crime writers like Erle Stanley Gardner, the creator of “Perry Mason,” who dedicated “The Case of the Dubious Bridegroom” to her. Gardner called her “One of the few women who ever kept Perry Mason guessing.”

Lee died in Bethlehem, New Hampshire, in 1962. A book of photographs and essays by Corinne May Botz was published in 2004. “Of Dolls and Murder,” a documentary by Susan Marks, was released in 2012.

“There’s a whole lot of Frances in every single one of these,” Nora Atkinson, the Renwick show’s curator, said of the Nutshells. “I think a lot, in these, that is subliminal or a little bit under the surface is all about her experience as a woman for some 60-odd years.” In “Attic,” an elderly woman hangs from the rafters, an apparent suicide. This is when I realized what a lousy detective I was. The report states it’s Christmas Eve. A pile of old letters lay like dead leaves beneath the woman’s dangling feet. She’s gone to the attic, where childhood goes — there are the toys — lost hopes — there is the spinster’s spinning wheel. Of course she did it. I jumped to my conclusion like I was going off a cliff with my eyes closed.

And yet — what about the scuffled snow on the path to the house? The open door? The unwashed dishes when the late Miss Jessie Comptom is neat as a pin?

If it’s any consolation, to you or to me, I’d make a terrible criminal too.

‘Murder Is Her Hobby: Frances Glessner Lee and The Nutshell Studies’ runs through Jan. 28 at the Renwick Gallery of the Smithsonian American Art Museum, Washington, D.C.; (202) 633-7970, AmericanArtInfo@si.edu.