Some police and protesters circle together during peaceful rallies

Raleigh, N.C. — After two nights of riots, a third night of protests remained peaceful in downtown Raleigh on Monday, although several dozen people ignored warnings by police to go home when the 8 p.m. curfew took effect.

In Raleigh, police were heard asking protestors to leave, saying, “We are under a declared state of emergency. There is a curfew in place. You are ordered to disperse immediately and returned to you home. Failure to comply will result in your arrest."

The group of 30 protesters finally dispersed at 9 p.m., although Raleigh police arrested at least five people for violating the curfew. At least 30 people were arrested in Raleigh during weekend protests.

Earlier in the evening, several hundred people chanted outside the Wake County Courthouse before marching down Fayetteville Street. They even staged a “die-in” protest by lying face down with their hands behind their back for 8 minutes and 46 seconds -- the length of time George Floyd was pinned to the ground with an officer’s knee on his neck.

11:40 p.m.: It was an emotional scene in Goldsboro where protesters and police showed unity by circling together to hug while voices in the background said, "This is exactly what we like to see."

In Fayetteville, a line of police officers took a knee in front of protestors to show support and solidarity. The actions moved some protesters to tears. 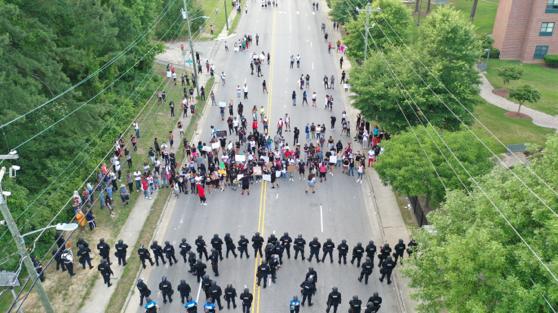 WRAL Gilbert Baez said it was emotional to watch -- some protesters embraced police, others gave a high five or fist-bump. 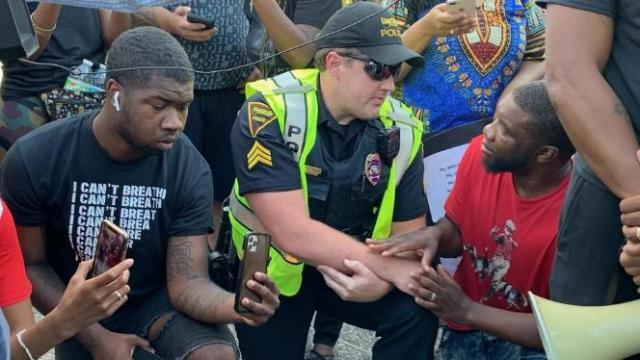 11:30 p.m.: Raleigh police have arrested at least five people for violating the 8 p.m. curfew. Kevin Linn of Raleigh, Chaquan King of Knightdale, Dana Dawson-Falling of Raleigh, Anthony Riley from Pennsylvania and Michael Stitt of Raleigh were all charged with the violations downtown. Linn was also booked on a weapons charge.

Meanwhile in Durham, nearly all the protesters are heading home.

11:00 p.m.: Less than a hundred protesters in Durham are marching down Main Street. There have been several instances of graffiti but no violence.

All remains quiet in downtown Raleigh. National Guard troops are still on site for precaution.

One of the groups protesting included a group mainly of NC State students that gathered at the Belltower and marched to the Governor's mansion and had a brief interaction with Gov. Roy Cooper.

10:00 p.m.: Durham protesters have returned to N.C. Highway 147 where they are blocking traffic but demonstrating peacefully.

In Raleigh, the National Guard remains downtown but all protesters have dispersed. About 30 people remained at the State Capitol after the 8 p.m. curfew but left an hour later without incident.

9:00 p.m.: The few dozen protesters who remained after the 8 p.m. curfew left the State Capitol grounds peacefully. No crowds are gathering in other parts of downtown.

It was the first night of Raleigh's curfew, but some business owners wished it had happened one day sooner.

In Durham, hundreds of protesters are still peacefully gathered outside the police headquarters. There is no curfew in Durham tonight.

The department wrote on Facebook, "There was a group of 40-50 citizens that peacefully assembled at the NCDMV office on Goldsboro St. and then marched to the area of Malpass Drive and Jordan Street. That group has now dispersed. The event was peaceful and without incident. ... We want to say thank you to all the support that we have received during these last two days."

8:20 p.m.: A crowd estimated at about 500 slowly diminished as a curfew went into effect in Raleigh. About 100 people remain gathered around the State Capitol.

8 p.m.: "We're here united, peacefully protesting," a man told WRAL News just after 8 p.m. He said most of those gathered were aware of the city curfew that took effect at 8 p.m. and were intentionally ignoring that order.

In Fayetteville, those who gathered in downtown earlier in the evening began to disperse as the second night of curfew took effect. Mayor Mitch Colvin said he told protesters "they will have a seat at the table" as police use-of-force is discussed.

A group of people marched to Benson police department headquarters chanting "No justice, no peace."

On Facebook, Roanoke Rapids Police wrote, "A group of 50+ community members assembled as planned on the corner of 11th St and Roanoke Avenue. They delivered powerful messages in a positive and peaceful manner. No violence. No incidents. No arrests. The protest ended around 7:10 PM."

7:55 p.m.: With a curfew scheduled to go into effect in Raleigh at 8 p.m., hundreds of people remained on the grounds of the State Capitol.

7:30 p.m.: A group of students from North Carolina State University who had marched from the Bell Tower down Hillsborough Street to the State Capitol began to disperse ahead of the 8 p.m. City of Raleigh curfew.

Barricades were blocking the entrance to the Midtown shopping center, site of looting Sunday night.

7 p.m.: Although hundreds of people were in the streets, protests on Monday night so far are peaceful in Raleigh and Durham.

A group of religious leaders briefly tried to shout down protesters in Durham, but the two groups remained apart and the rhetoric did not escalate.

6 p.m.: Police in Fayetteville said a protest near downtown had "become criminal" just before 6 p.m. and that arrests were being made when people failed to obey commands from law enforcement officers. According to the Fayetteville Observer, the protest started at Bronco Square across from the campus of Fayetteville State University.

Among them was a young mother who carried a sign describing her son. It read:

With a curfew looming, a group of protesters began to gather in downtown Raleigh Monday afternoon. People marched near Moore Square just before 4 p.m. and gathered to sit on the steps of the Raleigh Convention Center. 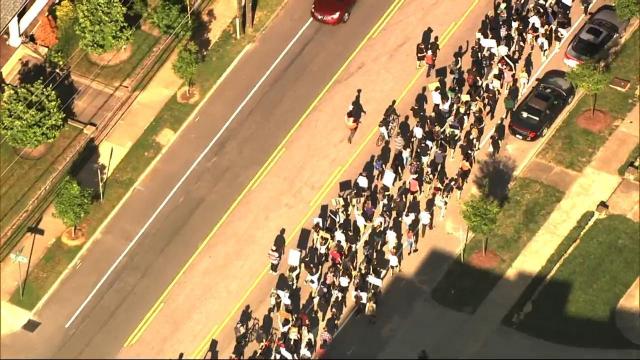 An organizer of the weekend protests told WRAL News his group planned to honor a curfew established by Raleigh Mayor Mary-Ann Baldwin but would return to the streets every night to press for change. Conrad James, of Living Ultra-Violet, encouraged peaceful protest, saying violence such as the vandalism seen across Raleigh from downtown to North Hills and Capital Boulevard is not necessary and would not help advance the cause for real change in police-community relations.

On both Saturday and Sunday, protests that began peacefully ended in violence and vandalism in the capital city, prompting Mayor Mary Ann Baldwin in order the curfew, in effect from 8 p.m. to 5 a.m. Seven people were arrested at North Hills and near Triangle Town Center before sunrise on Monday after retail stores were broken into.

Glass windows were knocked out at Harris Teeter and REI along with smaller North Hills businesses, including the Ideal Image medical spa.

Looters also smashed windows in a Target and Ross stores behind Triangle Town Center, and several other businesses were damaged.

"...My hope is that this will allow our community to pause, collect ourselves, begin to repair the damage, and turn our focus to the important work of finding connection and commonality," Baldwin wrote Monday. "We need to come together peacefully and as one community."

Baldwin said, while peaceful protestors are usually welcome on Raleigh's streets, the weekend riots were damaging to citizens and the businesses already suffering economic losses due to the pandemic.

"There is truth in the call for justice," she said. "For those who have protested peacefully, your voices are being heard and will always be welcome. The call for change can’t be answered, however, if we continue to allow destruction of our property and attacks on our small businesses that have already been hurt by this as well as the impacts of COVID-19."