Soldier, a suspect in disappearance of Pfc. Vanessa Guillen, kills self after confronted by police 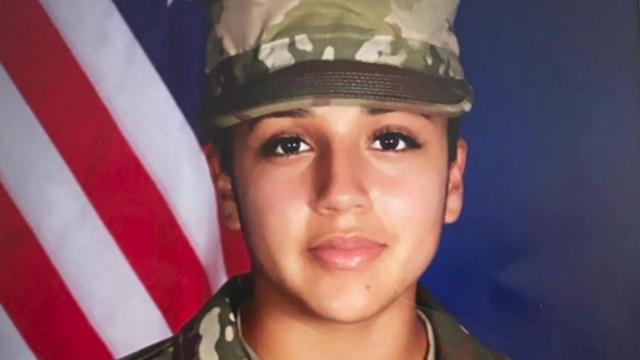 Texas Rangers arrested another civilian suspect in connection with Guillen's disappearance, according to US Army Criminal Investigation Command, which calls itself CID.

The suspect, who has not been identified, is the estranged wife of a former soldier from Fort Hood. She is in Bell County Jail awaiting civilian authorities to press charges, CID said.

"We have made significant progress in this tragic situation and are doing everything possible to get to the truth and bring answers to the family of Pfc. Vanessa Guillen," CID spokesman Chris Grey said.

Guillen, 20, was last seen in the parking lot of her barracks at the Texas Army base April 22, CID said.

Early Wednesday, US Marshals, Killeen police and the Lone Star Fugitive Task Force located the unidentified soldier suspected in Guillen's disappearance, CID said. He had left his Fort Hood post. The authorities confronted him walking along a commercial and residential thoroughfare on the northeast side of the city, a few miles from base.

"As officers attempted to make contact with the suspect, the suspect displayed a weapon and discharged it toward himself. The suspect succumbed from a self-inflicted gunshot wound," the Killeen Police Department said in a news release.

During Wednesday's news conference, Guillen's sister Mayra said she had met the soldier suspected in the disappearance of her sister.

"When I first went up to that base, that subject, I met him, not knowing that he had something to do with it. I felt something was telling me that he did something, and I wasn't wrong apparently," Mayra Guillen said. "And apparently now, he kills himself. Why? I don't know."

"But whoever is responsible has to pay, and we demand a congressional investigation," she added.

This came just hours after investigators discovered Tuesday the partial remains of a body near the Leon River in rural Bell County, where Killeen is located.

While authorities have not confirmed it, Guillen's family believes the remains belong to their missing loved one, they said at a news conference.

The remains were found in a shallow grave, and search operations were suspended, pending identification, said Tim Miller, the director and founder of Texas EquuSearch.

Authorities discovered the remains about 26 miles from the site where on June 19 investigators found the body of Pvt. 2nd Class Gregory Wedel-Morales, who went missing last year while driving in Killeen.

He was scheduled to be discharged within days of his disappearance, the Army said.

It's unclear whether there's a connection between Guillen and Wedel-Morales, but Army investigators say there is "no credible information" linking the cases.

Before Guillen went missing, she told her family that she was being sexually harassed by one of her sergeants at Fort Hood, according to a website her family set up to promote the search. The sergeant wasn't identified.

After she went missing in April, her car keys, room key, identification card and wallet were found in an armory room where she was working that day.

"Our hearts are broken. We feel pain, frustration and devastation. This shouldn't have happened. We demand a congressional investigation. We demand the truth," attorney Natalie Khawam said in a statement. "If this could happen to Vanessa, this can happen to any one of our sisters, daughters and mothers. There's no reason why a young beautiful girl who joined the Army, to honorably serve our country, should be in a shallow grave near on our own turf."

Correction: An earlier headline on this story had the incorrect rank for Vanessa Guillen. She is a private first class.