Raleigh, N.C. — A winter storm is in store for central North Carolina this coming weekend, with the when and where becoming more clear with each passing hour.

The National Weather Service is predicting more than a foot of snow for North Carolina's mountains, and the Triangle is likely to see some accumulation too.

"For the Triangle, it looks like we will go back and forth from snow to rain to sleet to snow," said WRAL meteorologist Aimee Wilmoth."We will likely get a taste of it all."

The storm will likely start as rain Saturday night before switching over to a wintry precipitation. The back-and-forth could continue through Monday, with snow returning during the morning hours.

"It should be fairly light at that particular point in time," WRAL Chief Meteorologist Greg Fishel noted.

A winter storm watch was issued Thursday afternoon for numerous counties in Central and Western North Carolina, including Chatham, Orange, Durham, Granville and Person counties. Four to eight inches of snow and one-tenth inch of ice is possible in the watch area. 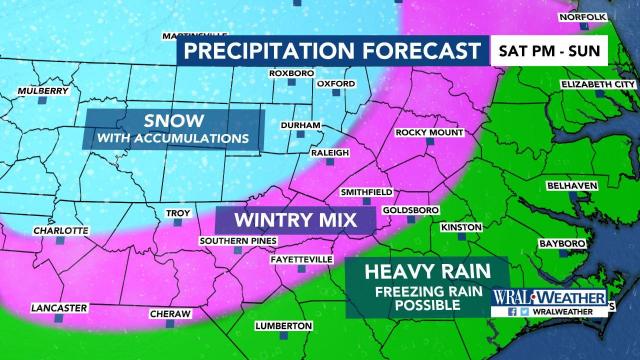 Further east toward I-95, one to four inches of snow are possible. The heaviest amounts will be north and west of Raleigh, especially west of U.S. 1.

"No matter what, I think it's safe to say that people should just stay home on Sunday," Wilmoth said.

Current models show Raleigh could get between 1 to 2 inches of snow while Durham could see as much as 2 to 4 inches.

Communities like Fayetteville, Lumberton and Kinston are more likely to see most of their precipitation in the form of a chilly rain.

"We still have a few days to watch this," Wilmoth said. "It still has several states to go through before it gets here. We will be fine-tuning those forecast numbers in the days ahead." 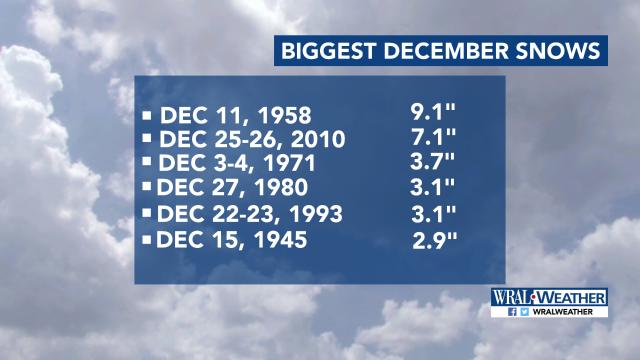 Historically, big snowfalls are rare in December, but travel impacts are still expected with this storm.

"History is telling us it's tough to get a big snow storm in December. It's early in the season and there's a lot of things working against it," Fishel said.

According to a statement issued by Gov. Roy Cooper, even eastern North Carolina could be affected.

"Areas along and east of the Interstate 95 corridor will likely see rain as the main precipitation type, and eastern North Carolina could see minor flooding from heavy rain, gusty winds along the coast and coastal flooding," he said Thursday morning.

The line that differentiates snow from wintry mix or just plan rain cuts right through Wake County, meaning residents there will need to pay close attention to the forecast on Friday and Saturday and as the storm develops. 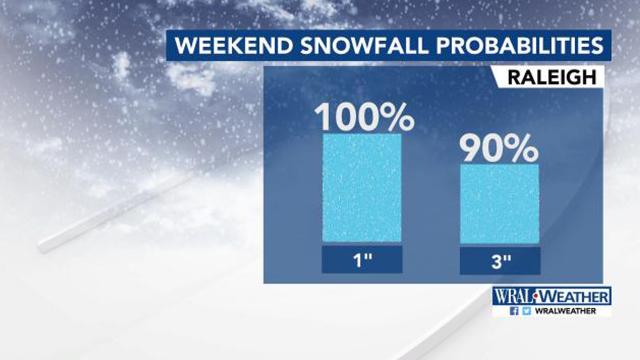 The North Carolina Emergency Management team plans to activate operations on Sunday, and the State Highway Patrol is also preparing its troopers to assist motorists and ensure highway safety.

More than 800 tons of salt have already been used to clear roadways in northwestern North Carolina following Wednesday's snowy preview.

Snow in the Triangle would likely start Sunday morning and accumulate throughout the day, according to WRAL meteorologist Kat Campbell. The bottom line is that travel could be messy.

"These impacts are going to last for a few days. Maybe even into early Tuesday, depending on how cold it gets," Wilmoth said.

East of Greensboro, snow is expected to turn to rain early Monday. Freezing rain could lead to power outages around Raleigh and westward, Campbell said.

Campbell doesn’t recommend canceling any Saturday plans because of the weather, but roads could be affected by snow starting Sunday and through Tuesday. People who live northwest of Raleigh should start preparing for a major winter event, while people in Raleigh eastward should be aware that a winter event is very likely.

Thursday will see partly cloudy skies and temperatures in the upper 40s. Temperatures will peak in the low 50s Friday before dropping for the weekend.