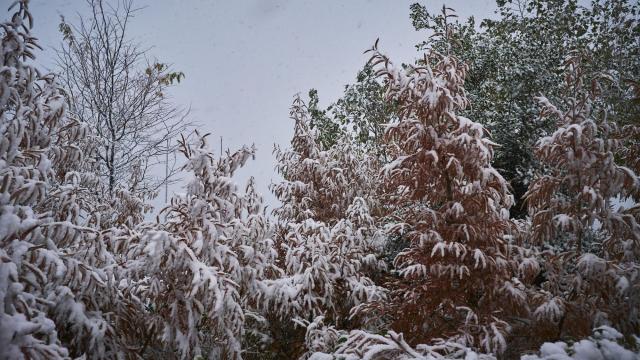 The snow that fell as forecast Thursday caused havoc for commuters in the New York region, whether they were trying to get home by train, bus or car. Even travelers at local airports experienced delays.

By 5:30 p.m., officials at the Port Authority Bus Terminal in Midtown Manhattan were advising commuters to take trains or ferries. With few buses able to get there, the terminal became so overcrowded that access to its second and third floors had to be blocked.The line of people waiting to get into the terminal stretched for a full block, all the way to Seventh Avenue.

Train service in New Jersey and Long Island was also delayed as the wintry weather froze switches on the rails.

New Jersey Transit warned that train delays could last for as long as an hour and suggested taking ferries or the PATH train to get across the Hudson River. By 8 p.m. N.J. Transit told commuters at Port Authority that delays for buses could be as long as three hours.

Murphy said his own commute, which would normally take 45 minutes, had taken closer to three hours.

“The plows are out, I’m on the Turnpike and it is relatively clear,” he told the television station. “But admittedly, it depends on what road you’re on.”

The Metropolitan Transportation Authority said on Twitter that some subway lines were delayed because of snow-related switch and signal problems.

At 6 p.m., Marlyne Page, an executive assistant who works in Midtown, had been in line for an hour but was still a block from the entrance to the bus terminal and the bus to Passaic, New Jersey. “And this isn’t even a real storm,” she said. “Someone didn’t plan.”

She was wet, cold and quietly furious, but exuding calm. “I’m not going to explode, because what would be the point?” she said. “Unless someone cuts in front of me.”

Many commuters wondered how a minor snowfall that came as no surprise could disrupt the transportation network in the nation’s biggest metropolitan area. Drivers complained that they had not seen any plows or salt trucks. Some complained of being stuck for hours on the roads.

The Bayonne Bridge was closed in both directions for more than an hour.

“We had several vehicles that had difficulty getting up the incline,” said Steve Coleman, a spokesman for the Port Authority. “We had to do heavy duty salting and sanding to get it safe.”

The incline of the bridge was raised two years ago to allow for bigger container ships to pass under.

In a tweet, Mayor Bill de Blasio said plows and salt spreaders would be out all night to clear roads before the morning commute. “First storm of the year hit hard and right at rush hour, downing trees and causing delays,” he wrote.

Rep. Adriano Espaillat, D-N.Y., expressed his frustration on Twitter and demanded answers from public officials about how such a meager snowstorm was able to undermine the city’s transportation systems.

“Moms are stranded with their kids, people are running out of gas,” he wrote. “This is unacceptable.”

Rep-elect Max Rose, D-N.Y., tweeted that there was “no excuse” for this kind of response to an expected snowfall. “I may not be sworn in, but I will be demanding answers,” he wrote.

On social media, many travelers complained about being unable to leave Newark Liberty International Airport in New Jersey because of infuriatingly slow transportation.

Ron Marsico, a spokesman for the Port Authority of New York and New Jersey, said ground transportation to and from the airport had been “severely curtailed” by traffic stemming from icy roads. He said AirTrain Newark was up and running but its service was less frequent because of icy tracks and that N.J. Transit trains that connect to AirTrain were significantly delayed.

Other travelers reported that they could not even get off the planes. One said he was stuck on a plane at Newark Airport after being diverted en route to La Guardia in New York. He said the tarmac was crowded with a sea of planes.

In Newark, officials closed off several highways late Thursday because of icy roads and collisions. Routes 280, 78, 21 and 22 were closed for the night, according to a news release from the Newark Police Department.

Schools throughout the metropolitan area had trouble getting students home on the clogged, slippery roads. In West Orange, New Jersey, the school district had to order buses to “shelter in place to address the road conditions.”

At 6 p.m., school officials tweeted out a picture of an auditorium filled with middle-schoolers, adding that “snacks are being provided, as well as activities and entertainment.”