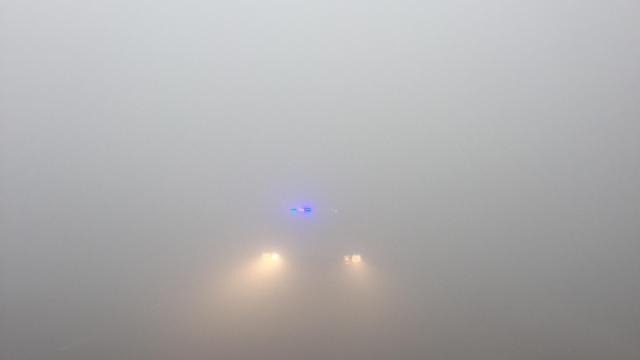 Cary, N.C. — A mulch fire on a construction site along Green Level West Road in Apex Thursday morning blanketed the area in smoke during the morning rush hour.

Nearby residents said they had smelled and seen smoke over the past few days.

"Yesterday it was a little hazy but nothing like it was today," said Barry Knapp. "You couldn’t see today."

Knapp said his wife, a teacher in Durham, didn't make it far before calling to report that she couldn't see to drive.

"I called her and I said, 'You’re going to have to wait there a little bit. Just wait for the sun to come up,'" Knapp said.

He eventually walked out to find his wife, navigating the smoky streets with his face covered in a scarf.

"I was standing at the edge of the road and there was a line of cars at the other side but I couldn’t see those cars unless I started walking into the road," Knapp said.

Apex Fire Marshall Karl Huegerich said construction crews for Sun Con had been burning piles of ground-up stumps and debris as they cleared land for a new subdivision. Those fires smoldered for a few days, but got out of control on Thursday.

Sgt. Michael Dorsey of the state Highway Patrol said Sun Con's clearing process was all aboveboard and that no laws had been broken.

The source of the fire was so deep in the woods that fire trucks were unable to reach it. Sun Con used bulldozers to spread out the burning brush over damp ground in an effort to extinguish it.

"They are trying to turn the piles over and mash them into the ground to alleviate the problem," Huegerich said.

A damp, foggy morning contributed to the lingering heavy smoke. Huegerich said early fog and humidity kept the smoke concentrated near the ground.

"There is nothing that would likely help the situation weather-wise other than rain, and there is none of that in the forecast," WRAL meteorologist Elizabeth Gardner said.

While firefighters tried to put out the fire and reduce the smoke, law enforcement officers closed Green Level West Road from White Oak Church Road to Wimberly Road and parts of Roberts, Beaver Dam and Green Level Church roads from about 8 a.m. until just before 11 a.m.

The first call about the smoke came in about 7 a.m., Dorsey said.

Visibility was reduced to almost zero, causing multiple wrecks and cars to run off the road, Cary police said. Officers escorted stranded drivers out of the haze at 5 mph.

"We had some troopers respond down here," Dorsey said. "They had a hard time actually getting access to the collisions."

They estimated it would take most of the morning to clear the smoke and the accidents.

Dorsey said troopers found at least three accidents – some involving more than one vehicle. No one was injured.