Elizabethtown, N.C. — Pork giant Smithfield Foods is cycling its hogs off of the farms targeted in recent successful nuisance lawsuits against the company, further heightening concerns for farmers worried that the suits will run them out of the hog business.

In at least one case, the company agreed to discuss continued payments after the hogs are removed, but whether an accommodation was reached is not publicly known. The federal judge overseeing these cases issued a gag order in them, limiting what people involved in the lawsuits are willing to say.

For state lawmakers, farmers and others who've been sounding an alarm about the impact nuisance lawsuits could have, the company's move is clear evidence of the mounting economic impact from jury verdicts that have already topped half a billion dollars from just three of 26 scheduled trials. For environmentalists and advocates for people living near the farms, it's evidence of intransigence from a company that could afford technological upgrades to control the stench of pig waste but would rather spend money on attorneys and public relations.

Rep. John Bell, R-Wayne, said it's stark evidence of the impact these cases will have on rural North Carolina.

"People say it's all about the big corporate entity, it's not about the family farmers," Bell said. "But when those contracts are pulled ... those farmers still have to pay off utility bills, loans."

Some 500 people have filed nuisance suits against Smithfield in North Carolina, complaining of the smell and other impacts from the open waste lagoons that dot the landscape of eastern North Carolina. Waste collects there and mixes with water, which is then sprayed onto nearby fields as a fertilizer to grow food for the pigs.

Evidence has been introduced at trial of DNA markers from pig feces, which attorneys said was collected from the homes of hog farm neighbors. Juries have sided with the neighbors on all three cases so far, and even with North Carolina's cap on punitive damages, Smithfield is facing nearly $100 million in damages already. 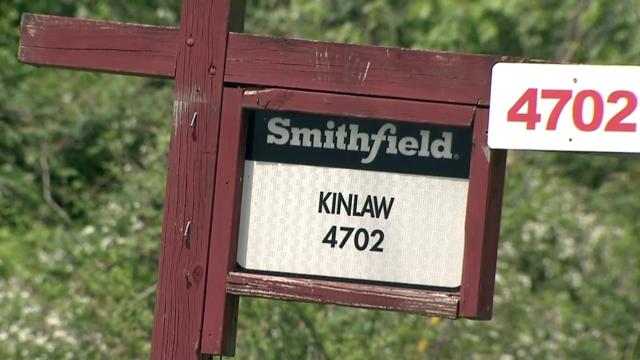 The Kinlaw farm in Bladen County was covered in the first trial, and Smithfield sent William Kinlaw a breach of contract notice about a week after that verdict was announced. In a follow-up letter, a vice president from Smithfield's hog production division told Kinlaw that the company wouldn't be sending him new pigs to raise and that the hogs already on the farm would be removed in the coming weeks.

A payment plan would be discussed with Kinlaw and his attorney, the letter said, but it wasn't guaranteed, and the company would "reserve the right to modify or discontinue the aforementioned payment plan at any time, without further notice."

Around the same time, the company sent a letter to all of its contract farmers, saying that removing hogs from the Kinlaw farm was the verdict's "highly unfortunate, but nonetheless unavoidable consequence" and that the situation showed the devastating effect litigation may have "on North Carolina’s hog industry, its economy and livelihoods of tens of thousands of North Carolinians."

"We do not know what actions can be taken on the farm to protect both the farmer and our company from even more costly litigation," Gregg Schmidt, president of Smithfield's Hog Production Division, said in the letter. "We are not aware, for example, of any technologies that would significantly reduce total odor from hog farms in North Carolina, as demonstrated by many years of research."

Plaintiffs' attorneys have argued repeatedly in these trials that viable technology is available and that the multibillion-dollar corporation, owned by a parent company in China, can afford it. The company has said these technologies aren't economically feasible. Schmidt acknowledged in testimony, though, that Smithfield was able to implement required changes in Missouri and continue operating there.

"Defendant has refused to pay for known alternatives that would eliminate odor and nuisance for surrounding neighbors," attorneys for the neighbors wrote in a brief during the latest trial.

Because of the gag order, it's difficult to confirm Smithfield's plans at all of the farms involved in these suits.

Morris Murphy, a contract farmer for the company, said he understands Smithfield will let Joey Carter's Duplin County farm finish growing the hogs it has, but the company won't replenish that stock late this summer as it otherwise would have.

Carter's farm was part of the second lawsuit to come to trial.

"He's in limbo like everybody else right now," Murphy said Friday. "There's nothing he can do. It's strictly a hog farm. ... He's got a million-dollar investment that's wasted now."

Murphy said he also spoke with Dean Hilton, who owns two of the farms at issue in the third trial, and Hilton expects to lose his hogs in the coming weeks.

Smithfield contracts with a number of private farms to grow its hogs, and different farmers handle different stages of the pigs' growth cycle. Murphy contracts with the company, but his farm hasn't been named in a lawsuit. He said he may still be affected, though, since removing pigs from some farms could impact his source for animals.

"No mistake, it's far-reaching," he said.

Bell said farmers don't have many options. They can't easily modify their farms to handle other livestock, and they can't simply contract with another hog provider because their farms have been declared a nuisance, he said.

"These folks are just kind of left and stuck," he said.