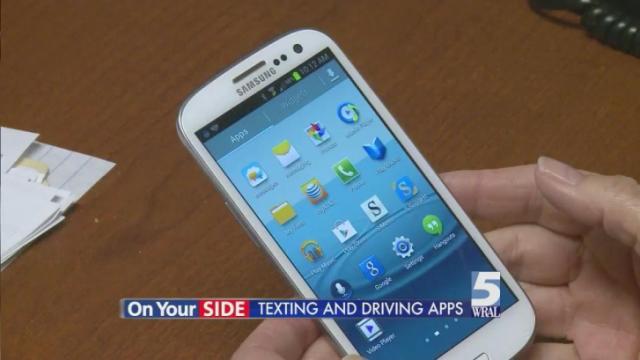 New mobile apps released from major cellphone carriers are aiming to help drivers break the habits that distracts them from the road, especially texting and driving.

Consumer Reports lists three apps for smartphones that disable certain features of a cell phone while a person is driving and can help prevent destructive accidents.

Sprint's "Drive First," Verizon's "Safely Go" and AT&T's "Drive Mode" Android apps can all block incoming texts and send a customizable automatic reply as well as limit incoming calls to select phone numbers. With Verizon's app, drivers turn it on before they drive. The others start automatically.

"So once you're going a certain speed, (with) AT&T it's 25 miles per hour and Sprint is 10 miles per hour, you don't have to think about it," said Liza Barth of Consumer Reports.

Sprint also offers a website where parents can monitor when teens use a phone while driving.

IPhone users can turn on the "Do Not Disturb" feature in their phone's settings to block text messages, phone calls and other alerts. However, the feature does not send an automatic response.

Amanda Kloehr was driving her car and using her phone when she got in . She said she nearly died. Now, she keeps her phone in the back seat, far from reach.

"I was in the hospital for two months straight, and then when they finally discharged me, I was still in and out of surgery for literally over two years after I got out," Kloehr said. "It's changed my life forever. I have pain every single day. It's not something that will ever go away."

Kloehr's accident is not a rare occurrence. The U.S. National Highway Traffic Safety Administration estimates that more than than 3,000 road deaths last year were from distracted driving and at any given moment 100,000 drivers are sending texts, checking email and more. To curb accidents, some states, including North Carolina, have made texting and driving illegal.