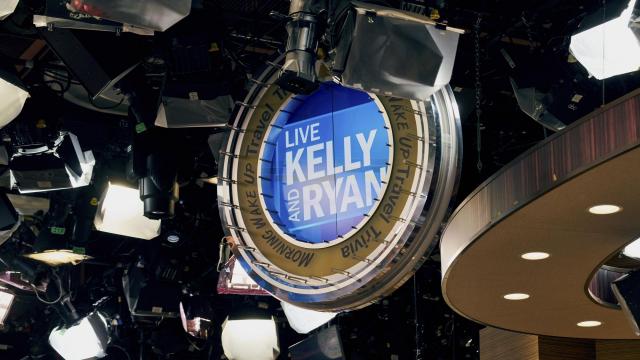 NEW YORK — Producer Michael Gelman was here, in this bare-bones Manhattan television studio, back in the 1980s, when Regis Philbin and Kathie Lee Gifford were putting on a casual morning show for a local New York audience.

He was here when the program went national and the competition grew intense, with Phil Donahue and Geraldo Rivera grabbing morning viewers with tabloid-ready guests and issues-driven segments. Even then, the show stuck with its identity as a place of pleasant banter.

And Gelman is still here today, three decades later, as he oversees an incarnation of “Live” co-hosted by Kelly Ripa and Ryan Seacrest, who are keeping the mood light in a time of divisive politics and fraught discussions of social issues.

“The hosts have changed, but the overall concept continues on: two people, a man and a woman, and enjoying the chemistry between them,” Gelman said last week in a backstage interview.

“We were counterprogramming when Geraldo was up against us years ago and Nazis were hitting him in the face with a chair,” Gelman said, referring to a brawl on Rivera’s show. “It’s not the first time we’ve been counterprogramming the more depressing parts of life.”

As Ripa put it after a recent taping: “We’re good time Charlies. That’s what you’re signing up for.”

Through the first 10 weeks that have pitted Ripa and Seacrest against Kelly in the 9 a.m. slot, the ratings provide evidence that audiences agree with the strategy. “Live with Kelly and Ryan,” a syndicated program carried mainly by ABC affiliates, averages more than 3 million viewers. That’s 650,000 more than the number tuning in to the third hour of “Today,” a lead that has grown since Kelly joined NBC.

“Live” also has a big lead among viewers in the 25-54-year-old age group prized by sponsors. Last year, it brought in $183 million in revenue, according to Kantar Media, and that dollar figure is heading north. By comparison, the 9 a.m. hour of “Today” brought in $99 million last year.

Ripa, a former soap opera actress, joined “Live” in 2001 as Philbin’s co-host, replacing Gifford. Like Philbin — who retired in 2011 after logging more hours of airtime than anyone else in television history, according to Guinness — she has the ability to spin the smallest anecdote into morning-broadcast fare. Across her 16 years on “Live,” Ripa has often mined her life with her husband, actor Mark Consuelos, and their three children for material.

Seacrest, who joined “Live” in May, got his start as a radio personality in Atlanta and even now continues to host a daily radio show. He is a 21st century Dick Clark, the go-to guy for red carpet events and New Year’s Eve specials, and he will be returning to “American Idol” when ABC revives the show next year.

On “Live,” he plays the almost annoyingly perfect foil to Ripa’s more untethered on-air character. On a recent show, his co-host poked fun at him by suggesting he was more robot than man.

Ben Sherwood, president of the Disney and ABC television group, said he was pleased with the addition of Seacrest, who replaced former NFL star Michael Strahan after a search that lasted about a year.

“One of the things about morning TV and live TV is when you are on 250 or 260 mornings a year, the audience is smart,” Sherwood said. “They have X-ray vision. They see who you are. They know when you’re in a good mood. They can tell if you really like each other. In the face of new competition, Ryan and Kelly and ‘Live’ have stayed true to themselves and true to their mission in the morning.”

It also has not hurt that rival programs have been directly affected by the banishment of powerful men accused of inappropriate workplace behavior — Matt Lauer (“Today”) and Charlie Rose (“CBS This Morning”) lost their anchor roles because of sexual misconduct allegations against them.

It seems that what works at 9 a.m. is a liability in late night: NBC’s “The Tonight Show with Jimmy Fallon” has lost viewers as it sticks with a fun-and-games atmosphere, while its more politically engaged competitors, “The Late Show with Stephen Colbert” on CBS and “Live! With Jimmy Kimmel” on ABC, are gaining in the ratings.

“Live With Kelly and Ryan” exists at a great distance from all that. The opening segment of a recent episode was practically a party, with Ripa exclaiming to the revved-up studio audience, “Guys! Guess who’s back! Daddy’s back!”

Daddy was, of course, Seacrest, who had made his return after a rare sick day. He showed the audience a photo of the matzo ball soup that Ripa had sent to him from the Second Avenue Deli.

“It’s a miracle — a miracle cure,” she said, before discussing, at some length, the benefits of matzo ball soup versus those of pho. (BEGIN OPTIONAL TRIM.) Next, they fell into an aimless-seeming discussion of Instagram, the show’s makeup artist and a certain British singing star.

“I tend to melt when Sam Smith sings,” Seacrest said.

After the studio audience had left the building, the two hosts relaxed in a no-frills green room — part of a pokey workspace located next to the studio used for local news broadcasts by WABC-TV. Ripa joked about how the show has stayed largely the same over the years.

“We did get new stools,” she added, sarcastically. “That was pretty exciting. I don’t want to say brand new. We reupholstered them. Same frames.”

She noted that things are different in one regard: Varying from an in-house rule that prevailed during the years she worked with Philbin and Strahan, Ripa now socializes off-camera with her co-host. They text each other at night and hang out on weekends.

“Regis had a mandate: Absolutely no talking off-camera,” Ripa said. “He had almost a superstition about it. You save it for the show. I’d be like, ‘Good morning,’ and he’d say, ‘Save it for the air!'”

A good relationship between the hosts is no small matter. Last year, when Strahan broke the news that he was leaving “Live” for “Good Morning America,” Ripa walked off the show for nearly a week. “There was some post-traumatic stress from that experience,” Sherwood conceded.

Seacrest returned the compliment. “If it were raining outside and there was a puddle, I’d want to stand in front of Kelly so she wouldn’t get wet,” he said. “There’s that protection thing.”

(END OPTIONAL TRIM.) Before Seacrest joined her on “Live,” Ripa let him in on a secret to the show’s success. As Seacrest recalled it, she told him, via FaceTime, “I want to manage your expectations. It’s a local television show that’s broadcast across the country.”