Raleigh, N.C. — An ethnic slur was spray-painted on a campaign sign for Raleigh City Council candidate Zainab Baloch. But Baloch said the story doesn't end there, as her sign is now painted over with a message promoting love.

The slur, along with "Trump" and what appears to be a swastika, was found Friday morning on one of Baloch's signs along Louisburg Road. The Wake County Sheriff's Office is investigating the vandalism.

"For us to wake up to an image like this, we were just extremely disheartened," said Baloch, a Muslim who is among seven people running for two at-large seats on the City Council.

"To be honest, this hurts. There's no way around it," she said. "I'm still a human being, I'm still a person, and I still have feelings."

Artist Anna Podris heard about the situation on Facebook and says she knew immediately she wanted to help.

"It looks more beautiful than it did before," Baloch said. said. "The amount of support we received and how quickly it was was literally the turning factor in this." 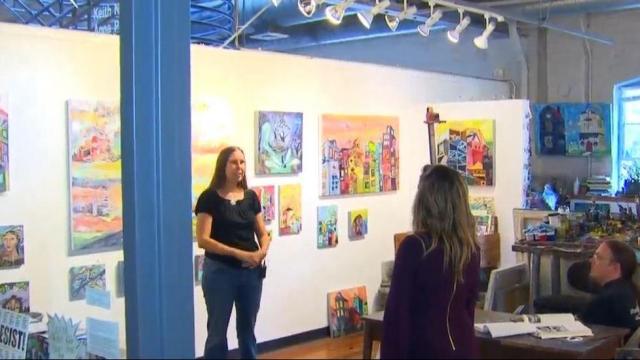 "There's been such a long tradition of artists using their cause for social justice, and so I wanted to use this opportunity to turn this hateful message around," Podris said.

She painted over the sign, making it into a work of art. Baloch said she was impressed by how quickly Podris started and finished the project.

"To be able to do that so fast just out of the kindness and for everyone to come out here today overshadows any type of hate we have received," she said.

Podris says, she knows it won't change what happened, and the effects may still linger.

But she's grateful to be able to use her craft as a force for peace and love.

"It's still there, the hurt is still there. But it just goes to show that there are people in this community that won't stand by and won't stand for that and watch that happen," Podris said.

Baloch says this whole situation has made her want to win the election even more.

"I put myself out there, but it's the people behind me that have been holding me up," Baloch said. " And without them, I would not be able to deal with this or go through this so. It's not just me alone."