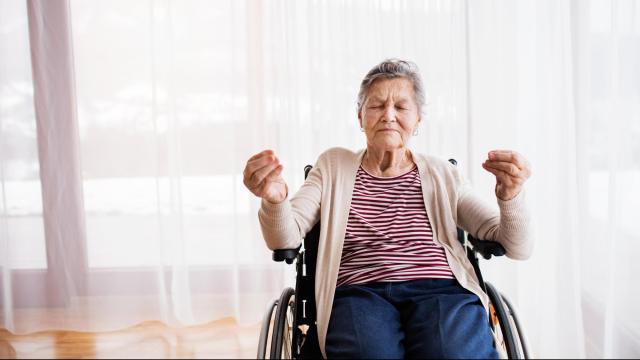 “Turn here,” my mom said after I, in an irritated voice said, “Which way?”

Fifteen years ago, when we first moved to Raleigh from Japan, my parents came to help us settle in.

“What’s the hurry?” she asked. She was trying to show me the way to the grocery store. The “hurry,” in my mind, was the hungry infant and toddler in the back seat.

I could feel my heart racing and my blood pressure rising. Where was this store? Why were we catching every red light? Where was all this traffic coming from? What do you mean saying, “What’s the hurry?”

At the time, my mom was around 60 and I was 36. She came from a long line of Finns from Karelia, which had one of the highest rates of death from coronary heart disease in the world. Her father had had three heart attacks before dying of the third quite young and she carried his genetic propensities.

When I was young I remember she, herself, was often in a hurry. However, I also remember coming home one day while in graduate school to find my mom lying quietly on the floor of her darkened bedroom.

"What are you doing?" I asked her.

“I’m doing my exercises,” she had responded with her eyes closed. "I'll be out in a minute."

She wasn't doing what I thought of as exercise in the traditional sense, though later I came to understand that this period of quiet meditation she did each day helped her in ways physical exercise could not. It helped her slow down and ask questions like, “What’s the hurry?” to grumpy, stressed, grown daughters.

The apple doesn't fall far from the tree and I carry the familial tendency (or maybe it's human or cultural tendency?) to live – by default -- in a revved up state, too. But now, like my mom, I know—and research has repeatedly proven—that developing a daily mindfulness practice in which, you take time to quiet your mind, to become familiar with its tendencies, to watch how it works when its provoked and when its not—can not only help you respond in the moment (to red lights and screaming toddlers) more wisely, it can actually physiologically change the gray matter in your brain.

In a well-studied eight-week program developed by Jon Kabat-Zinn over 20 years ago called Mindfulness Based Stress Reduction (MBSR), participants who committed to a very circumscribed daily meditation practice could actually change the structure of their brain (as documented through CAT scans).

It has been proven especially useful for caregivers struggling with the daily demands of declining spouses and parents under their charge, helping reduce the higher rates of anxiety and depression associated with this period. It is also seen as a “prescription” for those for whom no other pain relief methods have been effective.

If we take the long view of life on this planet, it’s not so different from what has been prescribed by well-known religious figures and philosophers. Socrates and Plato, after all, encouraged their pupils to “Know Thyself.”

Furthermore, a daily mindfulness practice is associated with many benefits, including decreased anxiety and depression, improved management of chronic pain (especially for those for whom nothing else has worked), Improved cardiovascular health, lower blood pressure, improved emotion regulation and many other benefits.

There are a number of places one can participate in the 8-week Mindfulness Based Stress Reduction program, in person or online. A good place to call for more information is the Duke Center for Integrative Medicine.