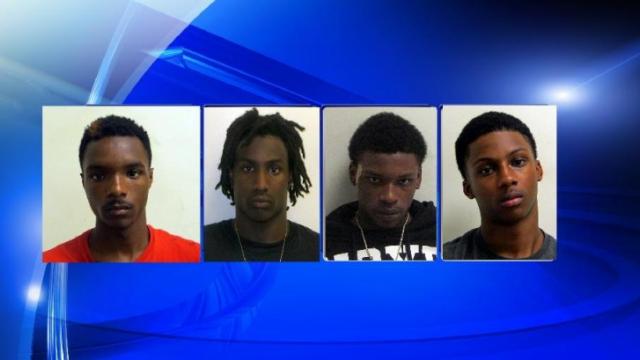 Kinston, N.C. — Two men were arrested Monday for their involvement in a shooting that left one teenager dead outside a Kinston church.

Sunday, police officers responded to a shots-fired call in the area of Bill Faye Park at about 5:15 p.m.

They found the body of Antonio Larinzo Hines, 18, of Kinston, on the property of Westside Free Will Baptist Church at 1205 Lynn Drive, which is next to the park.

The Kinston Police Department has arrested Thomas Maurice Bullock, 18, and Tyrek Rashaad Leach, 17, at 2808 Fairfax Drive and placed them in the Lenoir County Jail under no bond.

Investigators are still searching for Jaquel Daquan Lawson, 20, and Christopher Daquonne Hembry, 19, who are also believed to be suspects.

Witnesses told police Sunday that an older-model, white, two-tone Buick left the area around the time of the shooting with several people inside.

Anyone with information regarding the location of Lawson and Hembry is asked to call the Kinston Police Department or Lenoir County Crime Stoppers at 252-523-4444.