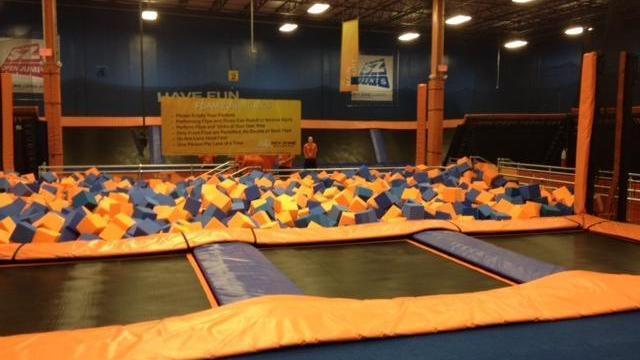 Sky Zone Raleigh, the latest trampoline park to hit the Triangle, will open its doors to the public for the first time at noon, Friday.

The 26,000-square-foot facility with 15,000 square feet of trampolines is on Westinghouse Boulevard not far from Capital Boulevard's intersection with the Beltline.

The local franchise is part of a chain of trampoline parks found around the world. Julie Russell, owner of the Raleigh park, said the company came up with the indoor trampoline park idea in 2004. The parks feature wall-to-wall squares of trampolines, each separated by padded borders, extending across large spaces. There also are foam pits with a trampoline under a large pile of foam and dodgeball and basketball courts with trampolines.

Russell, a former pediatric intensive care nurse, said the focus is on fun and safety at Sky Zone. For instance, only one person will be allowed on each square of trampoline at one time. Jumpers will be separated by age and height so a preschooler isn't jumping anywhere near a teenager. Russell said court monitors will be on hand to enforce these rules, among others.

Russell tells me that she and her husband learned about the concept after their daughter went to a similar park in Florida. She's also mom to a son with autism and plans to offer special, low sensory jump times for kids with special needs.

"I'm a mom. I'm a mom of a child with special needs. And I'm a nurse," she said. "I take safety of everybody seriously."

A concession stand offers treats and healthy snacks, including Jamba Juice fruit smoothies. The price starts at $10 for the first 30 minutes to jump. Admission gets you a pair of so-called SkySocks, non-slip socks that my daughter tells me made it a lot less slippery to jump.

Sky Zone Raleigh has three rooms for parties and other gatherings. Russell will be lining up exercise classes and special times for toddlers. Stay tuned.

Sky Zone is the second trampoline park to hit the Triangle. Defy Gravity has locations in Durham and Raleigh. A second Sky Zone location will open in Durham later this year.