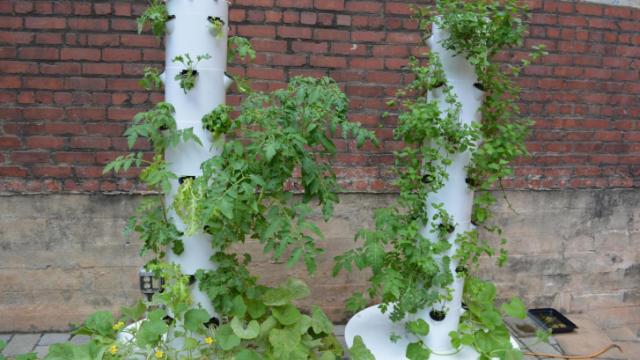 Raleigh, N.C. — Tower Gardens are catching on at restaurants across the country. These vertical, aeroponic gardening systems allow people to grow vegetables, fruits and herbs in small spaces like a rooftop, patio or balcony.

Empire Eats owner Greg Hatem has been on board since April when he purchased a few gardens as a test to grow some herbs and lettuce for one of his restaurants, Sitti. He hailed the towers as "one of the most efficient ways of gardening in urban environments."

There are now three of the towers on the patio at the Lebanese restaurant in downtown Raleigh. One of them even holds Hatem's grandmother's mint.

"It's the same mint that she planted back in the 1930s when she came to America. I transplanted some from her garden in 1999 and we have kept it growing since then. We often re-pot it and give it as gifts to keep the tradition alive. She passed away in 2000, and there was never a meal at Sitti's house that she didn't use mint. We had it in all the dishes; we even had it in the eggs for breakfast. I know she would be happy that the tradition is continuing at the restaurant that we created in her honor," Hatem said.

The mint, as well as basil and lettuce grown in the towers, have been used at the restaurant this summer. They are also harvesting eggplant, parsley, cucumbers, kale, cilantro, red cherry tomatoes, dill and are about to start on some Swiss chard.

"We love knowing where our food comes from, and it's great to get our food from 'the backyard' even if the backyard is on the roof in downtown Raleigh. Nothing tastes better than something that's just been hand-picked from the garden," Hatem said.

And the gardens aren't the only things buzzing at Sitti. They also have beehives on the rooftop to help with pollination. The honey created is used to make Hargett Street Honey, which is used down in the restaurant.

Emily Turgeon, a Sitti hostess and Tower Garden sales representative, first introduced Hatem to the gardens. The health and wellness coach said Hatem and Sitti Executive Chef Matt Scofield have been huge supporters of the project from the start.

She has also sold one to Happy and Hale, a fresh juice and salad restaurant in City Plaza. They are proudly displaying their garden right in front of the storefront.

"Two of the most important things to us as a company are providing access to the most nutrient-dense fuel possible and educating our community about where their food comes from and why it's important," Happy and Hale's Tyler Helikson said. "The Tower Garden is the perfect vehicle for both as it allows us to grow a portion of our produce on site, decreasing travel time therefore increasing nutritional content, while also enabling us to show our customers the entire process from seed to salad."