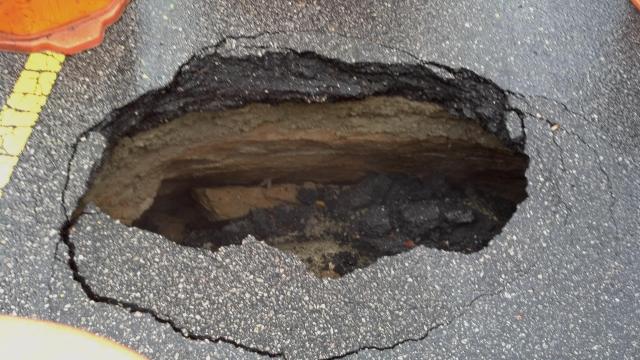 Fayetteville, N.C. — A sinkhole that opened up near a bridge construction project in Fayetteville caused major traffic delays in the downtown area Thursday, and it could be weeks before the hole is filled.

The sinkhole, caused by underground pipe failure, is near the intersection of N.C. Highway 24 and Dunn Road, an area already being affected by bridge construction over the Cape Fear River along U.S. Highway 301 and Business I-95.

The North Carolina Department of Transportation expects the road to be closed for at least two weeks.

Eastbound travelers on N.C. 24 can take the highway to North Broad Street to Person Street to N.C. 53 back to N.C. 24.

Drivers traveling on Interstate 95 will need to take Exit 46, N.C. Highway 87, to get into Fayetteville because of the bridge construction.

The bridge project began Tuesday and is expected to last up to two years.

View Fayetteville sinkhole in a larger map
SUGGEST A CORRECTION