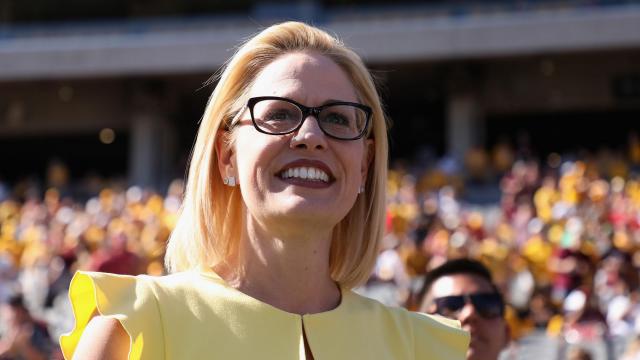 PHOENIX — Rep. Kyrsten Sinema, a Democrat and former social worker, scored a groundbreaking victory in the race for a Senate seat in Arizona, defeating her Republican opponent after waging a campaign in which she embraced solidly centrist positions.

Sinema’s victory over Martha McSally, a Republican congresswoman and former Air Force pilot, marks the first Democratic triumph since 1976 in a battle for an open Senate seat in Arizona. Sinema takes the seat being vacated by Jeff Flake, a Republican who is leaving the Senate after repeated clashes with President Donald Trump.

The outcome in Arizona had been too close to call for nearly a week, as large numbers of early and mailed ballots were counted. Sinema had trailed slightly in initial tallies on Election Day, but later counting put her ahead by a growing margin. On Monday, The Associated Press called the race and McSally conceded.

In a statement on Facebook Monday night, Sinema pointedly struck a nonpartisan note as she pledged to continue working in government to “find common ground.”

“That’s the same approach I’ll take to representing our great state in the Senate, where I’ll be an independent voice for all Arizonans,” she wrote.

The victory by Sinema points to a remarkable shift in Arizona’s political landscape. The state was a Republican bastion for decades, but Democrats are seizing on dissatisfaction with budget cuts and growing unease over the Trump administration’s immigration crackdown to make inroads with moderate voters.

With Sinema’s triumph, Democrats now hold six seats in the state’s congressional delegation, and the Republicans five. The Democrats have not had a majority in the delegation since the 1960s.

Voter drives to register more Latinos, who generally vote Democratic in Arizona, appear to have paid off for Sinema. About 2.1 million Latinos live in Arizona, about one-third of the state’s population. Though Trump narrowly carried the state in the 2016 election, many Latinos in Arizona have expressed displeasure with the president.

Sinema started out in politics as a liberal activist and spokeswoman for the Green Party. She shifted to the center after winning a seat in the House of Representatives in 2012, and she has since drawn criticism from some on the left for siding with Trump and other Republicans on some legislation.

While Sinema frequently voted with conservatives in the House, her background also stands in contrast to many other members of Congress. She endured poverty and was homeless as a child, before becoming a social worker and obtaining a law degree. Sinema is also openly bisexual, and has spoken about facing bullying as a child because of her sexuality.

Sinema, 42, won the race by about 1.7 percentage points amid increasing partisan tension. (Her lead could grow even larger as remaining votes are counted.) Some prominent Republicans, including Trump, claimed without offering proof that voting officials were engaged in fraudulent strategies to bolster Sinema, as the authorities struggled to count ballots following a surge in turnout.

Michele Reagan, a Republican and the Arizona Secretary of State, dismissed those claims. She said it took time to count the hundreds of thousands of early ballots that were dropped off on Election Day at polling stations, after which county officials had to verify the signature on each ballot.

“These processes take a little bit of time,” Reagan said in a statement, emphasizing that the methods used by the authorities are “to ensure that voters can trust the outcome of their elections.”

In a twist to the race, Sinema easily outperformed McSally in her rival’s own congressional district, which includes Tucson. In campaigning around Arizona, Sinema held up Sen. Joe Manchin, D-W.Va., a centrist who won re-election this month, as a role model.

After taking her seat in Congress in 2013, Sinema joined the Blue Dog Coalition, the most conservative group of House Democrats, and sometimes angered progressives, including immigration activists, by refusing to meet with them.

Unlike other prominent Democrats in the state, Sinema also refused to back David Garcia, the party’s nominee for governor. Garcia, who lost to the Republican incumbent, Gov. Doug Ducey, on Nov. 6, voiced support for liberal policies that stood in contrast to Sinema’s positions.

That strategy opened Sinema to substantial criticism from the left. The Green Party candidate in the Senate race, Angela Green, received more than 47,000 votes even though she dropped out of the race and endorsed Sinema.

Even so, Sinema’s supporters argue that her victory offers a path forward for Democrats seeking to win pivotal races in other Republican-held states.

Meanwhile, some who voted for her want to see Sinema adopt a less accommodating approach to dealing with Republicans.

“I want them to put the president in check,” said Laura Avila, 58, a faculty member at Glendale Community College, referring to Sinema and other Democrats who won in Arizona.