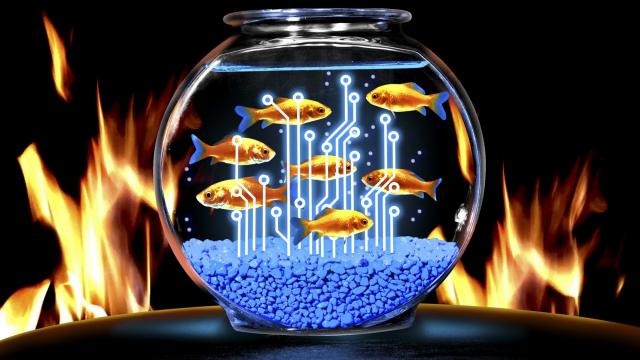 Not long ago, it was Jessica Powell’s job to defend Silicon Valley from those who would question its worldview. As the head of public relations at Google, she ran a sprawling team that sought to buff the search company’s image and to keep criticism of the world-dominating, do-everything tech behemoth to a minimum.

A year ago, Powell left Google. Her departure did not follow the Silicon Valley script; instead of decamping to a Google rival or a hot startup, she decided to go to graduate school for a master of fine arts in creative writing.

Now the digital publisher Medium is publishing Powell’s debut novel, “The Big Disruption,” a zany satire set inside a tech giant that bears more than a passing resemblance to a certain internet search company. (The novel is Medium’s first full-length book; it can be read online for free.)

The book is no tell-all cri de coeur against Google; Powell still regards the search company with fondness, and she notes that her book was inspired as much by an earlier, harrowing experience she had at Badoo, a European dating startup where she was the chief marketing officer.

Still, like others who have recently left the comfortable confines of big tech — for instance, the founders of WhatsApp or the activists behind the Center for Humane Technology — Powell has been liberated to offer a detailed and critical perspective of a cloistered industry. Her book’s subtitle explains how it should be read: “A Totally Fictional but Essentially True Silicon Valley Story.”

It is the essentially true bit that gets attention. While the events in Powell’s satire are purposefully and hilariously over the top — a major plot point involves a moon colony — her diagnosis of Silicon Valley’s cultural stagnancy is so spot on that it is barely contestable.

Broadly, Powell suggests that many of Silicon Valley’s problems can be laid at the feet of an engineering-and-data-obsessed monoculture that invites little input from people outside the bubble.

This is hardly breaking news. Google and its rivals have published annual diversity reports for years, yet their overall statistics have barely budged. Several recent studies only underscore the problem. According to an examination by Carta, a company that manages employee equity, women are systematically given smaller stakes in startups, and a study by the recruiting firm Hired found that there is a persistent wage gap in the industry, too.

Yet through fiction, Powell illuminates the persistence and pervasiveness of the male-dominated tech bubble in a way that is difficult to appreciate in a parade of headlines about industry scandals.

Powell smartly recognizes a truth that many in the industry elide: A lack of diversity is not just one of several issues for Silicon Valley to fix, but is instead the keystone problem — the source of much else that ails tech, from its recklessly expansionist zeal to the ways its brightest companies keep stepping in problems of their own making.

In short, Silicon Valley’s problem is sameness, stupid — and in Powell’s telling, we are not going to get a better, more responsible tech industry until we get a more intellectually diverse one.

“I don’t think that everyone has an equal voice,” Powell said in an interview. “Even putting aside broader issues around gender diversity, ethnic diversity or class diversity, there’s also an issue around people’s educational backgrounds. If you have a hierarchy where engineers are at the very top and the people who are interfacing with the outside world are a couple rungs below that, you really miss something when those people don’t have an equal voice at the table.”

She added: “It’s a monoculture of thought, and that’s a real problem.”

Google declined to comment on Powell’s book. Badoo did not respond to an inquiry.

Powell began writing “The Big Disruption” in 2012, as she was moving from Badoo back to Google, where she had worked earlier as a contractor. Her fictional company, Anahata, is something of an amalgam of the two. Like Google, Anahata made it big as a search engine, but now it has a hand in every tech pot, from social media to artificial intelligence to Genie, an app that predicts the future.

Like Larry Page — one of Google’s founders and now the chief executive of its parent company, Alphabet — Anahata’s founder, Bobby Bonilla, is painfully awkward. He prefers to hold meetings in the men’s room, and speaks in big-picture riddles that confuse his underlings.

And like Google and every other tech giant, Anahata’s executives and employees feel crushed by the daily threat of obsolescence. A nimbler startup called Galt keeps poaching Anahata’s employees and beating it to new technologies.

“Life extension — we aren’t working on it, and I am certain Galt is doing it,” Anahata’s chief engineer complains. (As it happens, one of Google’s sister companies is working on life extension.)

It is in their pursuit of Galt that all at Anahata seem to lose sight of the outside world. They grow reckless with their power, blind to their effect on anything beyond tech, and they systematically sideline any voices that counsel some new and less obviously idiotic path.

But they do it, in Powell’s view, more out of a cultural narrow-mindedness than out of the malice that sparks other sendups of Silicon Valley, such as Dave Eggers’ “The Circle.”

“I think we ascribe far too much mal-intent to large companies, like they wake up every morning thinking they want to be overlords in this Darth Vadery way,” Powell said. “I think it’s much more a base, ego-driven desire to be the biggest and the best.” She described the dynamic as a constant jockeying for position within an industry that talks only to itself. “It’s a lot of looking at what your competitors are doing — you have AI, I have AI. You have a drone, I have a drone,” she said.

And once in that loop, it can be impossible to break out of Silicon Valley’s viscously insular ways of thinking.

Consider, for instance, how women are treated in “The Big Disruption.” Anahata is egregiously misogynistic, which Powell said was inspired by her time at Badoo more than Google (though Google, of course, has had its own well-documented struggles hiring more women).

There are no women of importance in Anahata’s ranks, and the company exploits its few female employees in ways that make Uber look good in comparison. Still, the only female character in the book, a Friedan-spouting feminist, buys into the company completely. She is happy to paper over Anahata’s problems by offering some high-minded, fanciful justification for terrible behavior today — because to get ahead in tech is to join the cult.

Ultimately, it was the cultishness that got to Powell, too.

“There was a component that had been building for some time — a feeling that I was starting to, in some cases, defend the indefensible,” Powell said of her departure from Google. She pointed to the creeping extremism of YouTube, which is owned by Google — how its recommendation algorithms, tuned to maximize a business model built on engagement, can push viewers toward ever more extremist content, so you might start off watching a Donald Trump rally and find the service suggesting white supremacist rants.

“The debate around that — what is our responsibility? — was building, and I didn’t always feel we had enough urgency,” she said. (Google has said that it has poured resources into fixing this issue.)

More than for any particular controversy, Powell said, she left Google for a reason that resonates with the primary theme of her novel — because of the industry’s dreary sameness.

Every morning, she rode a fancy shuttle bus to Google’s offices, where she was lavished with food and other perks and encouraged never to leave — and to work to exhaustion, if not burnout.

“I felt like I’d ceased to become anything else,” she said. “All I did was work all the time and talk about tech.” She concluded that a job that asked her to jump from crisis to crisis, that did not admit time or perspective to consider many ideas that were outside its small world, was not the best use of her time.

Powell does not have any easy or obvious ideas for how to address tech’s monoculture. She thinks of her book as starting a conversation. But any solution, she said, will involve “a fundamental, bottoms-up cultural change” — and one that we should not expect to see overnight.

“Big ideas should be simple. Napkinable,” one of the Anahata executives declares in the book.

Fixing tech will be anything but.